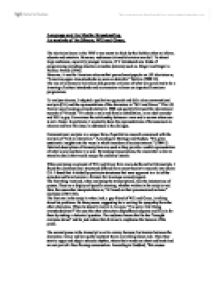 An analysis of the Sitcom, Will and Grace.

Language and the Media: Broadcasting. An analysis of the Sitcom, Will and Grace. The television boom in the 1950's was meant to abide by the Rethian ethos to inform, educate and entertain. However, audiences claimed television was dull. To attract large audiences, especially younger viewers, ITV introduced new kinds of programming including situation comedies (sitcoms) such as Abigail and Roger in Atletico Partick (1956). However, it was the American sitcoms that proved most popular on UK television as, "American upper-class standards are seen as desirable." Scollon (1998:56). The rise of commercial television did generate criticism of what was perceived to be a lowering of cultural standards and an excessive reliance on imported American programmes. To analyse sitcoms, I adopted a qualitative approach and did a close conversational analysis (CA) and the representations of the characters in "Will and Grace." This US Emmy award winning comedy started in 1998 and quickly followed the international success of "Friends." It's about a male and female cohabitation, in an adult comedy and Will is gay. It examines the relationship between a man and a woman where sex is not a factor. ...read more.

In doing so, they increase the pitch of their voices to convey confidence and to gain authority in the workplace. This is also known as the Hyperbolic Text Choice. In scene two, in Grace's Office, the two women are fighting over Jack. The persistent use of exclamation marks immediately connotes aggressiveness. Grace: Right! So tell him that his father - Karen: I'm still talking! Grace: All I'm saying- Karen: Quit interrupting me! Grace: Don't yell at me! This type of short sentence structure is known as staccato rhythm. It's a means of creating dramatic tension. The reason behind this tension could be the connotation of "interruption that speeds up the conversation." West and Zimmerman (1974:81) When someone doesn't finish a sentence because they're interrupted, this then hastens the next sentence, because they want to finish what they were saying. When people are speaking fast, especially Americans, they tend to substitute words in the dialogue. Aitchison and Lewis (2003) devised some theories about word substitution. "It's very characteristic of spontaneous discourse to avoid tedious repetition." For example, words like "so" and "gonna" are common words in American slang that are difficult to detect because they are used so often in Will and Grace. ...read more.

It's part of Walker's theory about "predictability." Walker (2000:51). "By affirming the cognitive stability of gay identity as a category, but rather endorsing gay identity as a signifier of resistance to the often exclusionary logic of identity that nonetheless makes possible at given moments for different constituencies, an identity of resistance. Endelman (1994). The character of Jack was allowed to be as gay as he liked, because he had a gay identity that was accepted by the audience. In conclusion, Will and Grace was an apt sitcom to analyse. The conversational analysis showed many theorists ideas about pauses and language rhythm. It showed how, when analysing the transcripts, a clear idea of how the dialogue is structured can be seen. This qualitative approach allowed me to do an in-depth research into the language and its structure. A quantitative analysis would have prevented me from doing so. The language also showed clear gender representations in the series. The main characters have strong representations, including homosexual representations, that are not commonly seen in other sitcoms. It challenges the preconceived ideologies that some viewers may have when watching television, but it is not shocking. Previous discourse has allowed Will and Grace to freely adopt gay representations for their characters that has proved a huge success internationally. ...read more.