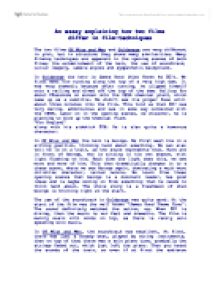 An essay explaining how two filmsdiffer in film-techniques - 'Of Mice and Men' and 'Goldeneye'.

An essay explaining how two films differ in film-techniques The two films Of Mice and Men and Goldeneye are very different in plot, but in structure they share many similarities. Many filming techniques are apparent in the opening scenes of both films; the establishment of the hero, the use of soundtrack, colour imagery, camera angles and sympathetic background. In Goldeneye the hero is James Bond (Also Known As 007). We first meet him running along the top of a very high dam. It was very dramatic because after running, he clipped himself onto a railing and dived off the top of the dam, falling for about 20seconds on screen onto the USSR chemical plant, which came up as a subtitle. We didn't see his proper face until about three minutes into the film. This told us that 007 was very daring, adventurous and was in some way connected with the USSR. Later on in the opening scenes, we discover, he is planning to blow up the Chemical Plant "For England" along with his sidekick 006. ...read more.

The sound definitely matched the action, eg. When 007 is diving, then the music is ver fast and dramatic. The film is mainly music with words on top, as there is rarely solo speaking solo music. In Of Mice and Men, the soundtrack was excellent. At first, there was just a steady beat, played by string instruments, then on top of that there was a solo piano tune, gradually the strings faded out, which just left the piano. Then you heard the sounds of the train, so even if at first the audience wasn't sure about what the object was, the music told them. Then there was chase music, which also made the action very obvious that it was a chase and not just say, a running race! The film was mainly words, but the soundtrack matched the action. Goldeneye was a great example of colour imagery. Colour imagery also leads to emotion, as shown here. ...read more.

The camera angles were excellent in Goldeneye. The first good one was right at the start, when the audience looks through a gunhole at the red, white and black. Also when James Bond is falling from the dam, you see him from above, below and the side. When he enters the chemical plant you see the man sitting on the toilet from above and also from the person's own eyesight. When 007 is falling from the plant to try and catch up with the plane, you also see him from above, below and the side. Of Mice and Men hardly has any special camera angles, but here is one of the ones I spotted. When George and Lennie are hiding in the swamp, you see thought George's own eyes, and see what he is also seeing. It is interesting to see that two films so different in script share so much in the types of film technique. Examining a film so thoroughly definitely brings a deeper understanding and shows how hard a film directors job must be, if they were to direct a film! ...read more.

Even at GCSE level, the conclusion of an essay should refer to the title and opening paragraph. In this case, it should sum up the comparisons and contrasts that appear in the narrative. Ideally, it would reflect briefly on why the differences are necessary, and why the things that remain constant between the films must remain constant.