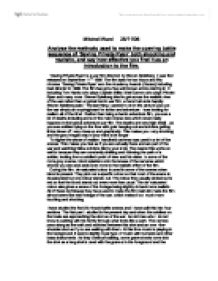 Mitchell Ward 28/11/06 Analyse the methods used to make the opening battle sequence of 'Saving Private Ryan' both shocking and realistic, and say how effective you find it as an introduction to the film. 'Saving Private Ryan' is a war film directed by Steven Spielberg. It was first released on September 11th 1998. The film lasts for two hours and fifty minutes. 'Saving Private Ryan' won five Academy Awards (Oscars) including best director in 1999. The film has got a few well known actors starring in it including Tom Hanks who plays Captain Miller, Matt Damon who plays Private Ryan and many more. Steven Spielberg tried to get across the realistic view of the war rather than a typical heroic war film, where it all ends happily. Steven Spielberg said, 'The last thing I wanted to do in this picture was use the war simply as a springboard for action and adventure. I was looking for realism all of the time'. Rather than being a heroic adventure film, you see a lot of deaths including some of the main characters which never really happens in the typical adventure war film. The deaths are very high detail, as you see soldiers lying on the floor with guts hanging out and soldiers getting limbs blown off, very close up and graphically. ...read more.

At this point I felt shocked and I felt the sense of madness as I watched so many soldiers die. Soldiers who haven't been shot yet struggle and do anything to get out. At this point handheld cameras are being used. Soldiers jump over the edge of the boat into the deep sea and the camera follows. At this point, I felt like a solider as the camera dunks in and out of the water. As the camera goes under the water the sound is muffled as the soldiers would be, but I could still slightly make out the sound of bullets hitting targets and bombs exploding. The camera the goes to an over the shoulder shot from the German's point of view shooting the soldiers. The sound of the guns is ear piercing. The handheld cameras are used again as it proceeds up the beach, going past soldiers getting shot and half dead soldiers lying in pain. I felt shocked as I saw some horrific sights of soldier's injuries. The sounds continue and they don't stop. The scene is very lengthy but there is continually something pulling you back in as every time you feel the slightest bit bored, something really interesting happens to make you alert again. ...read more.

This is because Steven Spielberg didn't aim for an action-adventure style war film, he went for the full on 'real footage' type. At a few points in this film, you forget you are watching a film and think you are watching a history program with real footage of the film. This shows how well Steven Spielberg's techniques worked. His attempts to 'put chaos up on the screen' have also worked very well. Rather that just showing solider's getting shot, you see legs getting blown off and soldiers lying on the floor with their guts hanging out, crying for their mothers, which is quite emotional to the audience. This also makes it so shocking that some people cannot stand to watch it. After watching the first twenty-four minutes of the film, I feel that I could not have gone away without watching the end. This film is incredible and it holds you in your seat for the whole time. All of the way through the first battle scene, you are on the edge of your seat as soldier after soldier is killed, and with the use of handheld cameras which make you think you are there, this is made so much more realistic. In my view, I think Steven Spielberg has created the perfect war film and it is everything he wanted it to be. After the introduction, you are not let down by the quality and seriousness of the rest of the film. ...read more.