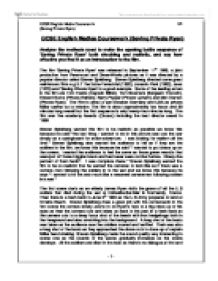 GCSE English Medias Coursework (Saving Private Ryan) Analyse the methods used to make the opening battle sequence of 'Saving Private Ryan' both shocking and realistic, and say how effective you find it as an introduction to the film. The film 'Saving Private Ryan' was released in September 11th 1998, a joint production from Paramount and DreamWorks pictures as it was directed by a popular director called Steven Spielberg. Steven Spielberg directed some great well-known films e.g E.T the Extra-Terrestrial (1982), Jurassic Park (1993), Jaws (1975) and 'Saving Private Ryan' is a good example. Some of the leading actors in the film are Tom Hanks (Captain Miller), Tom Sizemore (Sergeant Horvath), Edward Burns (Private Reiben), Barry Pepper (Private Upham) and Matt Damon (Private Ryan). The Film is about a war between Germany and USA as private Millar carries out a mission. The film is about approximately two hours and 50 minutes long overall but the first sequence is only twenty-four minutes long. The film won five academy Awards (Oscars) including the best director award in 1999. Steven Spielberg wanted this film to be realistic as possible we know this because he said ''the last thing I wanted to do in this picture was use the war simply as a springboard for action-adventure. I was looking for realism all the time.'' ...read more.

The mood of the fear and tension is created as the audience is given a cursory introduction to some of the main characters. The second scene starts as soon as the boats doors open as lots and lots of soldiers are shot and killed, this happens continuance as soldiers after soldiers are killed in all of a sudden with in seconds of leaving the boats. Steven Spielberg does a great job with the camera work in scene two as he takes medium and close up shots of the soldiers being killed. There are also shots over the Germans shoulders perspective as it gives them sense and advantage over the soldiers on the beach. As soldiers plunge into the sea the camera follows them, giving the audience their perspective as the soldier's struggle both below and above the sea. Steven Spielberg makes the sound effects really interesting as there are very loud gun fires which are the sound of bullets firing and spreading into their attended targets. Their also was instructions shouted out as there was muted sounds too when the bullets zipped through the water and killed many soldiers below the sea. The sound mutes every time the camera sinks below the water giving the soldiers perspective. Various perspectives give overviews of the carnage as the camerawork brings the audience closer to the action most of the time. ...read more.

The camera then suddenly zooms in to a big close up of his eyes and then cuts to show the audience his point of view. Steven Spielberg also does a great job with the music and sounds as the music is very gentle as it quietly fades in and the wave sounds are peaceful as there is prolonged noise, chaos and destruction. The melancholy music adds to the solemnity of the image. The peace in this scene is a relief for the audience after the exhausting tension, chaos and horror of the battle. The final shot shows the name 'Ryan' on the backpack of one of the fallen soldiers as it establishes a link between the sequence we have just seen as well as both the title and the plot of the film. I found this film really shocking as it was scary and horrifying to see all the soldiers getting killed in such horrific ways. I thick that Steven Spielberg certainly succeeded in making this film because this film is the most realistic film I ever seen and Steven Spielberg wanted it to be the most realistic film ever. I think overall I would give this film a 10/10 as this is one of the best films because this film is as realistic as it gets in reality as I found this film a superb and magnificent film to watch. ?? ?? ?? ?? GCSE English Media Coursework 1/3 (Saving Private Ryan) - 1 - ...read more.