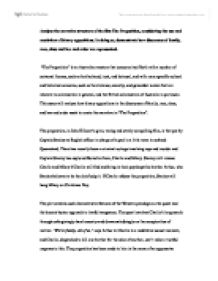 Analyse the Narrative structure of The Proposition.

Analyse the narrative structure of the film The Proposition, considering the use and resolution of binary oppositions. In doing so, demonstrate how discourses of family, race, class and law and order are represented.

“The Proposition” is an Australian western that concerns itself both with a number of universal themes, such as brotherhood, trust, and betrayal, and with more specific cultural and historical concerns, such as the violence, anarchy, and genocidal racism that are inherent in colonisation in general, and the British colonisation of Australia in particular.

This essay will analyse how binary oppositions in the discourses of family, race, class, and law and order assist to create the narrative in “The Proposition”.

The proposition, in John Hillcoat’s grim, taxing and utterly compelling film, is that put by Captain Stanley an English officer in charge of a gaol in a little town in outback Queensland. There has recently been a criminal outrage involving rape and murder and Captain Stanley has captured Burns brothers, Charlie and Mikey. Stanley will release Charlie and Mikey if Charlie will find and bring in their psychopathic brother Arthur, who Stanley believes to be the chief culprit. If Charlie refuses the proposition, Stanley will hang Mikey on Christmas Day.

The plot contains such characteristic features of the Western paradigm as the quest and the bounty-hunter approach to lawful vengeance. The quest involves Charlie’s long search through unforgivingly harsh country and draws satisfyingly on the complexities of motive. “We’re family, all of us,” says Arthur to Charlie in a meditative sunset moment, and Charlie, dispatched to kill one brother for the sake of another, can’t make a truthful response to this. The proposition has been made to him in the name of an oppressive regime and, as the film moves inevitably towards the Christmas reckoning, it seems less and less likely that Charlie will be able to meet its terms.

The central narrative line is certainly engrossing enough, and it echoes so many Westerns in which the protagonist is charged with finding an outlaw and bringing him in, and in the course of the search and the journey the labels of ‘hero’ and ‘villain’ become more than a little blurred. The search for Arthur, found lurking in the stony recesses of the outback with the remnants of his gang, recalls Ford’s film, “The Searchers” (1956) as Charlie rides solitary through rigours of climate and terrain, his motives becoming clouded, as John Wayne’s did in the U.S. classic western. (McFarlane, 2006:2) Similar as it may be to its American predecessors, “The Proposition” is understandably carving its own genre of its own.

Will Wright has developed a narrative structure for Western films and has categorised them into smaller sub-genres, including, the classical plot, the vengeance variation, the transition theme, and the professional plot. (Wright, 1975: 157) However, “The Proposition” defies all of these sub-genres, creating a new genre of its own.

“The Proposition fiercely resists the trappings of its genre. Indeed it could be said to be a psychological thriller masquerading as a western.” (Cenere, 2006: 40)

How then does such a film avoid so many of the narrative trappings of its genre to create something completely of its own merit? Claude Lévi-Strauss’ concept of binary oppositions may be the reason.

Claude Lévi-Strauss is a French anthropologist who developed structuralism as a method of understanding human society and culture. One such method of his is to look for the structure of a story, or myth, in terms of binary oppositions. (Lévi-Strauss, 1967: 201) An image of something (the concept of good, say) is structurally opposed in a story to an image of something else (the concept of bad, say). In this way the sensible differences between things become symbols of conceptual differences. Moreover, every primitive society has a system of such oppositions, which give meaning to the images of important things in that society’s existence. (Lévi-Strauss, 1967: 201) In “The Proposition”, it is through the film’s characters that Lévi-Strauss’ theory can occur.

The opposition of characters creates the conceptual image of social types; but to understand how story presents a model of appropriate social action between these types, we must know what they do and how they act. This is the narrative dimension of the story. According to Lévi-Strauss, “the narrative aspect of the story is to the binary aspect as melody is to harmony in music” (Lévi-Strauss, 1967: 203); the former provides the interest, the latter provides the depth. Lévi-Strauss also argues that the narrative contains only superficial, or apparent, content; the real, conceptual meaning of the story is established and communicated solely by the structure of oppositions. (Lévi-Strauss, 1967: 202) However, the narrative structure tells us what the characters do, and unless we know what they do, we can never know what they mean to people who not only think, but also act. Now with this knowledge are we able to delve into the binary oppositions that are evident in “The Proposition”.

“The proposition plays like a western moved from Colorado to Hell. The characters are familiar: The desperado brothers, the zealous lawman, his civilized wife, the corrupt mayor, and the resentful natives. But the setting is the Outback of Australia… this world is sun-baked, hostile, unforgiving, and it breeds heartless men.” (Ebert, 2005:1)

As Ebert notes, the binary oppositions apparent in most Western films are also evident in “The Proposition”. Such binary oppositions include, individual desires versus family values, good versus evil, innocence versus corruption, primitive versus civilised, natural versus cultural, and colonisation by the British versus the harsh realities of the Australian Outback. The most powerful of all these binary oppositions would most certainly have to be the different representations of family depicted in the film, through the Burns brothers, Captain Stanley and his wife, Martha, and the pseudo-family of Arthur Burns’ gang.

The complex elements and representations of family are most noticeably defined through the Burns brothers. As an audience, we witness the gentle, somewhat protective, concern that Arthur and Charlie show toward Mikey, and yet the sibling dynamic within the Burns family equally produces an unstable tension between brotherly love and betrayal. This tension, of course, is eventually resolved by Charlie’s final act. But family is also constructed out of friendship. When Arthur and his psychopathic cohort, Samuel Stoat are riding in the mountains, Arthur meditates on the features of the misanthrope.                                                    “What’s a misanthrope”? Samuel enquires. “Is that what we are”? “Nahh”, says Arthur, “we’re a family.” For Arthur, the bonds of family are not entirely tied to blood, but rather the creations of a family arise out of the “idea” of family. And so it is here that we see the materialisation, the representation perhaps, of the penal colony and its being based on an idea rather than blood neatly articulated.

“Perhaps you've read On the Origin of the Species by Means of Natural Selection by Charles Darwin? Oh, don't be thrown by the title, he had some most fascinating things to say. Chilling things! Mr. Darwin spent time studying Aboriginals. He claims we are, at bottom... one and the same! He infers, Mr. Murphy, that we a share a common ancestry with monkeys! Monkeys!” (Jellon Lamb, “The Proposition”, 2005)

Jellon Lamb’s criticism of the Aboriginal people serves as an adequate summation for the pseudo-scientific racism of the nineteenth century. One of the film’s most powerful touches is the depiction of the Aboriginal trackers, who help both sides of the law. Where previous films such as “Ten Canoes” have shown these figures as merely mute onlookers, in “The Proposition” they are more pivotal players. In one scene, the British’s tracker played by David Gulpilil has his throat cut by Arthur Burns’ tracker Two Bob, in reprisal for a massacre. Scriptwriter, Nick Cave, said of this depiction of Aboriginal people in film,

"When I arrived on set, the black actors who were there came to me and said, 'Finally we've got a film where we fight back, which shows that we actually made some attempt to defend ourselves." (Cave cited in Cornwell, 2005:1)

Films often tend to privilege male roles, while objectifying the female characters and denying them a voice, as O’Shaughnessy puts it, ‘... male characters are often set at the centre of a film while women serve secondary support functions... as appendages of men’ (1999:113). The implicit meaning that audiences can take from this is that women are in some way inferior or secondary to men. The Proposition’s portrayal of women tends to embrace this traditional model; whilst Martha Stanley has a significant role in this film, the rape of Martha lies a well-worn narrative convention whereby female vulnerability inevitably results in sexual abuse. We are alerted to Martha’s helplessness early in the film. It is made clear that her husband wants to protect her and “the stock standard concept of a vulnerable woman falling victim to rape is nevertheless gratuitously employed” (McFarlane, 2006:2). In the milieu of the film, rape is unfortunately used as the method that returns us to the film’s central narrative: Captain Stanley’s proposition. However, the rape of Martha provides the incident for Charlie to resolve his moral dilemma about his brother and, in turn, carry out the terms of the contract.

In a film of extreme and disturbing violence, there is still some tenderness at its heart. The finely wrought relationship between Captain Stanley and his wife, Martha, and their house, cleverly counterbalances the animalistic bloodletting of brother against brother, black against black.

“The Stanley home carries all the hallmarks of an English country home. Tea is sipped from delicate china cups. Roast dinners are eaten in defiance of the unbearable heat. A portrait of Queen Victoria adorns a wall.”(Hart, 2005: 1)

At the beginning of the film, the Stanley home merges the interior with the exterior. The interior of the home seems light and open despite the oppressive heat. But as “The Proposition” comes to its unpleasant conclusion, the home has become a stronghold against the violent Arthur Burns and his gang. The window shutters are tightly shut and the doors are locked. The Australian settlement that Captain Stanley’s sought so much to control remains defiant to such advances.

“The Proposition” has created a world of violent action and cruel injustice and of attempts to make something gentler in the face of its hostility, and of not succeeding. The film is also more than just another Western; its narrative and use of binary oppositions add a dynamic to the film that exceeds all expectations. At the beginning of the film Captain Stanley asks of Australia and quotes Shakespeare, “What fresh hell is this?” Audiences, with any luck will hopefully ask the same thing of “The Proposition”, which will catch many people off-guard, so frequently and deliberately indefinable in its subject and style. If nothing else, both thematically and formally, the film quivers with the violent unpredictability of the frontier.