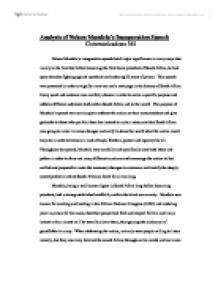 Analysis of Nelson Mandela's Inauguration Speech Communications 361 Nelson Mandela's inauguration speech held major significance in many ways due mainly to the fact that before becoming the first black president of South Africa, he had spent decades fighting against apartheid and enduring 22 years of prison. This speech was presented in order to signify a new era and a new page in the history of South Africa. Every word and sentence was carefully chosen in order to serve a specific purpose and address different audiences both within South Africa and to the world. The purpose of Mandela's speech was not simply to address the nation as their new president and give gratitude to those who put him there but instead to make a statement that South Africa was going to make immense changes and unify to show the world what the nation could truly do in order to become a land of hope, freedom, justice and equality for all. Throughout the speech, Mandela very carefully and specifically uses both ethos and pathos in order to draw out many different emotions and encourage the nation to feel unified and prepared to make the necessary changes to overcome and rectify the deeply rooted problems which South Africans faced for all too long. Mandela, being a well-known figure in South Africa long before becoming president, had a strong established credibility within the black community. ...read more.

He gave South Africans a sense of pride for putting up a fight and not giving up their dreams of change, for being able to put up with so much and still come out strong and optimistic for a brighter future instead of resentful and eager for revenge. "The time for the healing of the wounds has come, the moment to bridge the chasms that divide us has come" Mandela was also able to make an immediate call to action and a necessity to act as quickly as possible. One of the most important emotions that Mandela successfully created within the people through his speech though was the feeling of hope; hope for a better future, a unified nation, better opportunities for both themselves and future generations and hope that all the changes were absolutely possible as long as they joined together to work towards these goals. Another important audience Mandela was speaking to was the white South Africans. It was very important to address the needs of this particular group because they had been in power for decades and were feeling nervous anticipation about the immense changes in process. Mandela made sure to present his message very carefully in order to not bring up feelings of rebellion, resentment or retaliation. His goal was not to attack them and force them to pay for past actions, but instead to understand and join together in making changes for a better future for all citizens regardless of color. ...read more.

By sharing the changes and goals that South Africa hoped to achieve, a sense of obligation and a necessity to show the world what they could do would emerge. He shared feelings of sadness with the world when speaking of the past and a willingness to help South Africa to achieve their goals because these goals were to be achieved not only as a nation but also as citizens of humanity and the world. "We thank all our distinguished international guests for having come to.... A common victory for justice, for peace, for human dignity." There was also a feeling of pride within this community when Mandela addressed the gratitude he felt towards the "heroes and heroines" for helping in the fight towards change. By bringing up this sense of pride, Mandela knew it would also bring a sense of obligation to continue doing the right thing and continue to help South Africa along on its road to peace. With a wealth of experience, knowledge and leadership, Mandela knew very clearly how important a speech like this would be to summon up the right emotions and states of mind for citizens in South Africa and the world. Every word, sentence and paragraph addressed different issues, brought up various emotions and helped to give a feeling of unity and a longing for change. By effectively combining his use of ethos and pathos, Mandela was able to address numerous audiences within one speech and send forth a common message to all. ...read more.