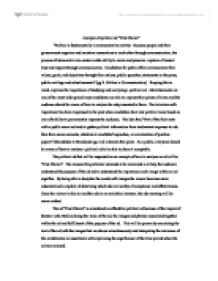 Analysis of political ad "First Choice" "Politics is fundamentally a communicative activity. Because people and thier governments organize and maintian connections to each other through communication, the process of democratic rule centers onthe ability to create and preserve a system of mutual trust and respect through communication. Candidates for public office communicate thier values, goals, and objectives through thier actions, public speeches, statements to the press, public mailings and advertisements" (pg 9. Politics is Communication). Keeping this in mind, explains the importance of studying and analyzing a political ad. Advertisements are one of the most wide spread ways candidates are able to express thier points of views and the audience should be aware of how to analyze the ads presented to them. The television ad's importance has been impressed in the past when candidates have lost political races based on one ad's ability to permanently impress the audience. The idea that,"Part of the fault rests with a public more inclined to gether political information from inadvertent exposure to ads than from news accounts, attention to candidate's speeches, or examination of position papers" (Broadsides to Broadcasts pg. xxi) reiterates this point. As a public, everyone should be aware of how to analyze a political ad to be able to deem it acceptable. The political ad that will be inspected as an example of how to analyze an ad will be "First Choice". The reasons this particular ad needs to be examined is to help the audience understand the purpose of the ad and to understand the importance each image within an ad signifies. By being able to decipher the words with images the viewer becomes more educated and is capable of determing which ads are worthy of acceptance and effectiveness. Once the viewer is able to read the ads in an analyitical manner, the ads meaning will be more evident. The ad "First Choice" is considered an effecdtive political ad because of the impact of Senator John McCain being the voice of the ad, the images and phrases associated together within the ad and fulfillment of the purpose of the ad. ...read more.

The important function of this type of ad is to praise the candidate and reinforce the positive feelings of supporters. According to Trent, "the ad's primary objective- extoling the candidate and ignoring the opponent" (pg. 156) should be easily recognized througout the ad. Throughout the ad "First Choice" the images and sounds capture the audience. The only noise throughout the speech is the voice of Senator John McCain introducing President George W. Bush to an audience. The speech is heard while images of war and positive attributes of Bush are seen. The voice of Senator McCain is extremely relevant to the effectiveness of the ad because in the 2000 Presidential election, McCain ran against Bush in the primaries for the Republican Presidential Nomination. He ended up losing the nomination and supported his party's candidate George W. Bush. Since that time McCain has been viewed as a strong force as the Senator of Arizona. The fact that McCain has run against Bush is not the only reason that his voice over is significant. The Democratic Party in 2004 considered McCain to run as Senator John Kerry's runningmate for the office of Vice President of the United States. The ticket would be bipartisan to generate more votes and increase the chances of the challenger obtaining the office of President. While McCain never intended on becoming the vice-presidential candidate, he was within the top 25 contenders for the position. (http://www.cnn.com/ELECTION/2004/special/president/candidates/vp.contenders/) It is doubtful that McCain would have accepted if the offer was extended. The point of the ad is Kerry would not be able to have McCain if he wanted to because of the strong support McCain now gives to Bush. In the ad McCain refers to Bush and the war in Iraq by saying, " It is a great test of our generation (the war) and he (Bush) has led with great moral clarity and firm resolve. ...read more.

154). The ad "First Choice" exemplifies this through having a respected source, Senator John McCain, speak about President George W. Bush to a crowd of people and point out the positive leadership and directional qualities Bush has shown. Throughout the entire ad Bush only speaks at the end to say he approves the ad, that reinforces the purpose of expressesing the "benevolent leader". The second purpose of the ad is to extol the virtues of the candidate, praise the candidate and reinforce the positive feelings of supporters. The ad accomplishes the first part of this through the "benevolent leader" qualities discussed previously. McCain lists several qualities of Bush that praise and appeal to the viewer. The supporters positive feelings of the candidate are reinforced through the connection of the images and sound. The audience understands through the ad that Bush is necessary part of surviving the war and are able to see the soldiers who are in the war supporting him. By showing the young men ready to fight the audience's emotions are targeted. A sense of American pride is tapped into through the images and help to create the positive feelings of supporters for Bush. The ad "First Choice" is proven to be an effective political ad through the voice over of Senator John McCain, the emotional plea to viewers through the combination of images/sound and the fulfillment of purpose of the ad. It matters that this ad has been a successful and an effective example of a political ad because by giving a base of how to analyze political ads helps the audience better understand what to look for within the ad. The ability to read an ad and be able to determine its effectiveness or acceptability as truth is important for audience. Since, "In most campaigns for statewide or national office, television spots are now the dominant mode of campaign advertising" (Uncivil Wars. pg. 99) the audience needs to have the tools of analyzing political ads so the truth of the ad is understood. ...read more.