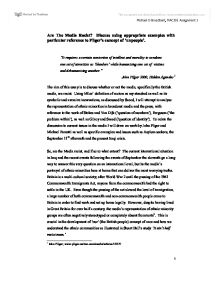 Are The Media Racist? Discuss using appropriate examples with particular reference to Pilger's concept of 'unpeople'.

Are The Media Racist? Discuss using appropriate examples with particular reference to Pilger's concept of 'unpeople'. "It requires a certain contortion of intellect and morality to condone one set of atrocities as 'blunders' while humanising one set of victims and dehumanising another." John Pilger 2000, Hidden Agendas1 The aim of this essay is to discuss whether or not the media, specifically the British media, are racist. Using Miles' definition of racism as my standard as well as its symbolic and aversive incarnations, as discussed by Saeed, I will attempt to analyse the representation of ethnic minorities in broadcast media and the press, with reference to the work of Stokes and Van Dijk ('question of numbers'), Ferguson ('the problem within'), as well as Gilroy and Saeed ('question of identity'). To relate the discussion to current issues in the media I will draw on work by John Pilger and Michael Parentti as well as specific examples and issues such as Asylum seekers, the September 11th aftermath and the present Iraqi crisis. So, are the Media racist, and if so to what extent? The current international situation in Iraq and the recent events following the events of September the eleventh go a long way to answer this very question on an international level, but its the media's portrayal of ethnic minorities here at home that can deliver the most worrying truths. ...read more.

That's like all British people being represented by 'thugish' football hooligans: it just isn't justified. This is reiterated in 'A Question of Identity' (Saeed, Gilroy) where the media try and use extremism, fanaticism and other negative issues to cloud the representation of minorities. The British press went ballistic when the figures for asylum applications were published earlier this year. In 2002 there were around 50,0008 applications off people from war torn and politically unstable nations like Afghanistan, Zimbabwe, China and Iraq. At present it is estimated that there are currently 300,000 asylum seekers resident in the UK for one reason or another. A drop in the ocean when you consider the population of Great Britain is approximately 58,564,000. The above number looks big out of context but they were able to fuel a public outcry in doing so. Those taking up residency (and indirectly second and third generation minorities who were born here) were seen as being a burden on the state as well as being in competition for housing, jobs and schools. These social problems become redefined as race issues,9 which generates further ill feeling within the uninformed British public toward ethnic minorities on the whole. "They not only set the agenda for public discussion but more importantly they strongly suggest how the readers should think and talk about ethnic affairs." ...read more.