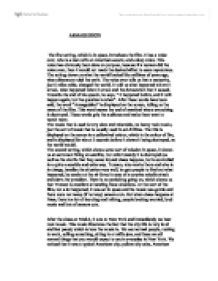 ARMAGEDDON The first setting, which is in space, introduces the film. It has a voice over, who is a man with an American accent, and a deep voice. This voice has obviously

ARMAGEDDON The first setting, which is in space, introduces the film. It has a voice over, who is a man with an American accent, and a deep voice. This voice has obviously been done on purpose, because if a women did the voice over, then it would not reach the desired affect to seem mysterious. The setting shows us what the world looked like millions of years ago, when dinosaurs ruled the earth. The voice over tells us that a meteorite, just 6 miles wide, changed the world. It told us what happened where it struck, what happened when it struck and the devastation that it caused. Towards the end of his speech, he says, " It happened before, and it will happen again, but the question is when". After these words have been said, the word "Armageddon" is displayed on the screen, telling us the name of the film. This word means the end of mankind where everything is destroyed. These words grip the audience and make them want to watch more. The music that is used is very slow and miserable, no heavy rock music, just the sort of music that is usually used in sci-fi films. The title is displayed on the screen in a yellow/red colour, which is the colour of fire, and is displayed for about 3 seconds before it shows it being destroyed, as the world would. ...read more.

I noticed when people are flying about and falling from eh sky, they looked like real people, so they would have been shot on blue screen and then added to the special effects. The audience discover what trouble the earth is in because of when Truman and his workers are explaining to the president what is happening, how big the meteorite is, when the shower will stop, and what effects it will have on the earth if it hits. Trueman describes to us that the meterite shower was "just the size of basketballs and Volkswagens". The president must obviously feel scared because of these words, because although they were very small they caused a lot of damage, and the main meteor will be about the size of Texas. The main shock of the The camera has several shots of the presidents face, his face is even displayed on eh monitor that Truman is watching. It shows his face and his facial expressions, like when he seems frightened or shocked. Truman calls the meteorite "a global killer", because it destroys everything on earth, "Nothing would survive, not even bacteria" as Truman says. These words link to what the film is called, Armageddon, which means the end of the world. As soon as the scene switches to the oilrig, we see Harry Stamper, who is hitting golf balls at the people protesting in the boat to stop the drilling. ...read more.

She is very independent of herself; she does not want her father to treat her like a little girl any more, as she is surprised when Harry starts shooting at AJ because he is very protective of her. She is obviously worried about her dad, he lost his wife and was forced to look after Grace, and she knows that he is an immature father. She is very caring towards AJ, her dad and anyone she loves, as she likes to protect them from anything bad that happens to them. Rockhound in the film is one of Harry's employees. He is very intelligent as he manages to find out where and what they landed on when they over-shot there landing point on the asteroid. He even admits to Colonel Sharp that "C'os I'm a genius". He obviously has a good sense of humour; he manages to break the tension in the film by coming out with stupid or sarcastic remarks, like when Colonel Sharp and Harry are fighting in the shuttle, he comes in and he says "Okay, what did we miss?" These short but humorous lines make the audience laugh and reduce the tension that the film is creating. He also seems to not care whether he will come back or not, as he borrows $100,000 from one of his friends and is so convinced that he wont come back. Even when they are drawing for straws to see who will stay behind and blow up the asteroid, he says that they should "all stay and die, but that's me". ...read more.