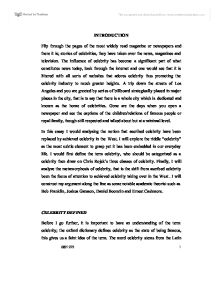 INTRODUCTION Flip through the pages of the most widely read magazine or newspapers and there it is; stories of celebrities, they have taken over the news, magazines and television. The influence of celebrity has become a significant part of what constitutes news today, look through the internet and one would see that it is littered with all sorts of websites that adores celebrity thus promoting the celebrity industry to much greater heights. A trip down the streets of Los Angeles and you are greeted by series of billboard strategically placed in major places in the city, that is to say that there is a whole city which is dedicated and known as the home of celebrities. Gone are the days when you open a newspaper and see the captions of the children/relations of famous people or royal family, though still respected and talked about but at a minimal level. In this essay I would analysing the notion that ascribed celebrity have been replaced by achieved celebrity in the West, I will explore the riddle "celebrity" as the most subtle element to grasp yet it has been embedded in our everyday life. I would first define the term celebrity, who should be categorized as a celebrity then draw on Chris Rojek's three classes of celebrity. ...read more.

One main reason why ascribed celebrity has been taken over by achieved celebrity is because of the media, since achieved celebrity are social constructions, there are thorn between the split personalities that they have to be: the I (veridical self) and the Me (self as seen by others) and this sometimes contradicts each other because the person there are might be totally different from what is portrayed by the media. Even if they represent individualised social types they do so by actively reconciling competing principles- personal identity with social identity, and individualism with conformity. Using Jade Goody as a case study, while she was in the Big brother house she played herself (veridical self) but the media played out a different part of her to the audience thus making people see her as a stupid white girl that was a racist and a trash talker, this eventually played out when she was diagnosed with a terminal cancer, people them saw the soft and motherly side of the lady who was once the black sheep of the media. This is not really applied to the ascribed celebrity as most times they are just their real self because they are not a creation of the media they don't have to act out for the public. ...read more.

That is, before the liberation of the celebrity culture industry, the monarch had the supreme power and was seen as one of the highest forms of power that exists, though still highly respected, achieved celebrity are now comparable to gods in their own right. The underlying truth is that these achieved celebrities have more appeal because they stand for "cool community", which people easily identify with. I can thus end this essay that ascribed celebrity has been over thrown by achieved celebrity in the West. REFERENCE ABC news (2009) Available from: http://diana-remembered.spaces.live.comBlog/cns!2244878A8C9B75DA!5458.entry (Accessed 21st July 2009) Boorstin, D (1992) The Image: A Guide to Pseudo-events in America. New York: Vintage Books Cashmore, E (2006) Celebrity/Culture. Oxon: Routledge Cohen, J. (2001) Defining Identification: A Theoretical Look at the Identification of Audiences with Media Characters. Mass Communication and Society, 4(3), 245-264 Franklin, B (2005) Key Concepts in Journalism Studies, London: Sage publications ltd. Gamson, J. (1994) Claims to Fame: Celebrity in contemporary America. London: University of California Press. Graeme, T (2009) Understanding Celebrity. London: Sage publications Holmes, S. Redmond, S. (2006) (Ed) Framing Celebrity: New directions in Celebrity Culture. London: Routledge. Lumby, C (1999) Gotcha: Life in a Tabloid World. Australia: Allen and Unwin publications Rojek, C. (2001) Celebrity. London: Reaktion Books ?? ?? ?? ?? 0821272 1 ...read more.