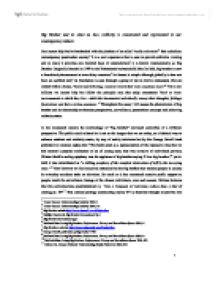 Big Brother and its slant on how celebrity is constructed and represented in our contemporary culture.

Big Brother and its slant on how celebrity is constructed and represented in our contemporary culture. One cannot help but be bombarded with the plethora of so called "reality television"1 that underlines contemporary postmodern society.2 It is a new experience that is seen to provide addictive viewing and to many it provides one hundred days of entertainment,3 it is known internationally as Big Brother. Originally founded in 1999 in the Netherlands by brainchild John De Mol, big brother is now a franchised phenomenon to over thirty countries.4 Its format is simple although globally it does not have an ascribed text,5 its foundation is seen through a group of ten to twelve contestants who are locked within a house, "bored and bickering; cameras record their every mundane move."6 Yet in our millions we cannot help but follow the principle axis that strips contestants "back to basic environments in which they live...which the housemates individually convey their thoughts, feelings, frustrations and their eviction nominees."7 Throughout this essay I will assess the phenomenon of big brother and its relationship to theorists perspectives, surveillance, postmodern concepts and achieving celebrity status. In the nineteenth century the terminology of "big brother" conveyed somewhat of a different perspective. The public mind referred to it not as the images that we see today, as a habitual way to enhance stardom and celebrity status, by way of reality television but by the George Orwell book published in nineteen eighty-four.8 The ...read more.

This again relates back to the Foucauldian concept of "panoptic vision over literally"19 that the editing and application of visual theory applies to the viewers expectations. It also indicates how reality TV can act as a way for the media to produce profit, through the viewers' participation. The surveillance space implied by Silverman's arguments however, is neither visualized nor interior. It relates to the idea that 'gay male' surveillance display, perverts the public/private binary by embodying and eroticising the abstract forces that structure it,"20 which seems unacceptable yet 'feminine' surveillance is regarded as acceptable to the shows viewers however this has been challenged as a misconstrued idea. Jade Goody is one of big brother's classic examples of editing and portrayal of character, that is thought to have helped her gain a status of what Rojek described as a celetoid21 celebrity. Goody was seen to be quite simple and unaware of the outside or political sphere surrounding her, yet it made her character attractive to viewers and resulted in her being included in the last three remaining housemates in series three of UK big brother. It has also helped her to be one of the few big brother stars to have been able to maintain a celebrity career, through having a column in magazines to being photographed at different celebrity events. Over the six series that have been previewed in the UK and internationally, big brother seems to retain its viewers and attract new viewers to watch each season that is produced, as it seems to offers more tasks and even bigger consequences. ...read more.

What is interesting is that even work from Foucault and academic theorists that had published ideologies on the topic, had identified the concept that is now known as reality TV many years before it was premiered on television screens. Even George Orwell and his idea of the big brother looking over our shoulder in society, has proved to be true. Although we appear to have turned the cameras into being used for another purpose, big brother is watching us and internationally we seem to thrive at it for the purpose of entertainment. Despite this fact people are willing to be put under twenty four hour surveillance, in order to strive and achieve the title of celebrity. So it can also be stated that Andy Warhol is correct in his statement that everyone will get their fifteen minutes of fame, especially at the rate of reality TV programmes that are being aired globally, from big brother to the x factor and even older programmes like stars in their eyes. An idea that arose from examining what strives people to go on big brother, may be the fact that even celebrities who have already ascribed themselves in the public eye. Are seen going in the house to re-launch their fading careers, it should maybe then not be a question of why people go on big brother, inside the focus should maybe be why is it that reality TV seems to be the only way to become a celebrity in the twenty first century. ...read more.