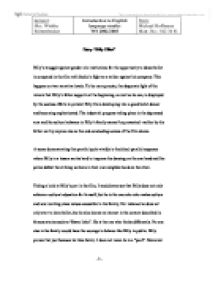 Essay "Billy Elliot" Billy�s struggle against gender role restrictions for the opportunity to dance ballet is compared in the film with Jackie�s fight as a striker against his company. This happens on two narrative levels. To be more precise, the desperate fight of the miners that Billy�s father supports at the beginning, as well as he can, is displayed by the useless efforts to prevent Billy from developing into a good ballet dancer and becoming sophisticated. The industrial progress taking place in the depressed area and the cultural advance in Billy�s family cannot be prevented -neither by his father nor by anyone else as the end concluding scenes of the film shows. ...read more.

For instance he does not only start to learn ballet, but he also shows an interest in the content described in famous stories such as "Swan Lake". He is the one who thinks differently. No one else in his family would have the courage to behave like Billy in public. Billy proves that just because he likes ballet, it does not mean he is a "poof". Moreover he even shows tolerance towards his gay friend Michael by still accepting him as his friend. Similar to Billy�s resistance against his old fashioned father the miners� strike is only being broken by a couple of workers at first. ...read more.

And so both story lines reach the same narrative end: Billy�s struggle for freedom of choice against his father is won. His father changes his mind and turnes into a strike breaker himself so that he can afford to pay for the ballet lessons. And the same way, Jackie�s resistance against Billy�s decision, to dance ballet, has been broken, the miner�s resistence against the company has been broken. Cultural and industrial progress have succeeded. One could say, Jackie is nevertheless being defeated on both levels his job and family, and that his joy in Billy�s success might just result in the new perspective his family has achieved along with Billy�s career. But in my opinion he is not defeated, he really has changed. 487 words - 1 - ...read more.

The basic idea, to compare and contrast the two narrative threads, is brilliant, but the author has mistaken a superficial (and ironic) similarity in the narrative arcs of the two struggles, for a deep similarity of meaning, and this weakens the whole discourse.

I agree that both struggles share important themes, most importantly the conflict between traditional working class values and the changes that are occurring in that part of England at that time. I even agree that Billy does in a sense "grow beyond" those values and comes to embody and embrace values that are closer to contemporary liberalism, bringing both hope and freedom for his family, because it means that at least one of them will escape the poverty trap of being a worker in a dying industry.

What I don't agree with is that the film-makers want us to regard this all as "progress". It's change, rather than progress, harsh change that is forced upon people and which for the most part was economically and culturally devastating to the area where the film is set.