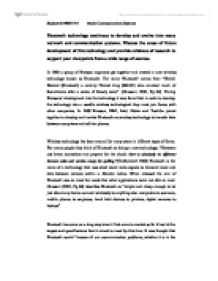 Bluetooth technology continues to develop and evolve into many network and communication systems. Discuss the areas of future development of this technology and provide evidence of research to support your viewpoints from a wide range of sources.

Bluetooth technology continues to develop and evolve into many network and communication systems. Discuss the areas of future development of this technology and provide evidence of research to support your viewpoints from a wide range of sources. In 1995 a group of Ericsson engineers got together and created a new wireless technology known as Bluetooth. The name 'Bluetooth' comes from "Harald Blatand (Bluetooth) a century Danish king (940-81) who reunited much of Scandinavia after a series of bloody wars". (Giussani, 2001, Pg 64). During Ericssons' development into the technology it was found that in order to develop the technology into a useable wireless technological they must join forces with other companies. In 1998 Ericsson, IBM, Intel, Nokia and Toshiba joined together to develop and market Bluetooth as wireless technology to transfer data between computers and cellular phones. Wireless technology has been around for many years in different types of forms. For many people they think of Bluetooth as being a new technology, "However just brace yourselves and prepare for the shock: there is absolutely no difference between radio and wireless except the spelling."(Dudbendorf, 2003) Bluetooth is the name of a technology that uses short wave radio signals to transmit voice and data between devices within a 10metre radius. When released the aim of Bluetooth was to meet the needs that other applications were not able to meet. Giussani (2001, Pg 64) describes Bluetooth as "simple and cheap enough to let just about any device connect wirelessly to anything else: computers to scanners, mobile phones to earpieces, hand held devices to printers, digital cameras to laptops". ...read more.

"The promise held out by wireless technologies is of a future in which any wireless device, whatever size, wherever located, can instantaneously connect to any other device on the planet - without today's constraint of requiring cables running between them".(Poynder, 2001) With the possibilities Bluetooth offers it will not be long before it is used in our lives on a daily basis and not even thinking about what the technology is or where it comes from. "The potential of the Bluetooth technology is virtually unlimited. One after another, new applications and products, as well as increased functionality, will be introduced." (Sigyartsen, 2001) With the technology on offer by Bluetooth it is straightforward to look into the possibilities of the future, all electronic appliances that are in the home and office could be linked up making everyday tasks slightly easier. Although it may still be some time before the technology is available it will be here in the future. When at home you could have your laptop connected to your coffee machine so that you can put the machine on to boil without even moving. Bluetooth "will be able to regulate the temperature of the refrigerator at the office, activate and deactivate the car and home security system from a desktop computer in the office or from the mobile phone." (Bluetooth is Future For Wireless Technology, 2003) You could play multiplayer games with your friends, or write e-mails on your laptop on the plane, then when you land and switch on your handset, the messages can be automatically sent by your phone. ...read more.

Mobile phone, Mobile computers, handheld devices, Headsets, Office equipment, Cameras, still image and video, Internet access and e-mail..." As we all know the world we live in today has all these devices available and are being used by humankind. With the evidence shown it will only be a matter of time before most electrical equipment will be Bluetooth enabled and users will be controlling them from wherever they are. When in the office you will be able to put a coffee machine on to boil before you are even there, Doctors will be able to respond and give advice to others before they turn up to an emergency. Whether it is an emergency at the hospital or elsewhere Doctors will be able to have a permanent connection whether through a headset or another device and will be able to give constant advice throughout. "Wireless devices will also always know exactly where they are located geographically, allowing, for instance, the emergency services to locate distressed 999 callers". (Poynder, 2001) The signals produced through Bluetooth will not interfere with hospital equipment and will not lose transmission in bad areas. Not only will it make certain aspects of life easier it will also be able to prevent little disasters from taking place. In order for all this to happen Bluetooth technology will have to expand and increase the distance that the radio signals are transmitted, that is the one limit on it at the moment the close proximity that must be kept in order to transmit signals. Once this problem can be overcome there will be no stopping the development and expansion of Bluetooth. ...read more.