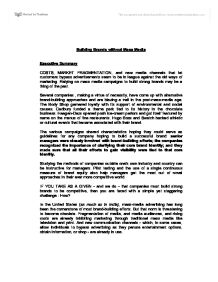 Building Brands without Mass Media Executive Summary COSTS, MARKET FRAGMENTATION, and new media channels that let customers bypass advertisements seem to be in league against the old ways of marketing. Relying on mass media campaigns to build strong brands may be a thing of the past. Several companies , making a virtue of necessity, have come up with alternative brand-building approaches and are blazing a trail in the post-mass-media age. The Body Shop garnered loyalty with its support of environmental and social causes. Cadbury funded a theme park tied to its history in the chocolate business. Haagen-Dazs opened posh ice-cream parlors and got itself featured by name on the menus of fine restaurants. Hugo Boss and Swatch backed athletic or cultural events that became associated with their brand. The various campaigns shared characteristics hoping they could serve as guidelines for any company hoping to build a successful brand: senior managers were closely involved with brand-building efforts; the companies recognized the importance of clarifying their core brand identity; and they made sure that all their efforts to gain visibility were tied to that core identity. Studying the methods of companies outside one's own industry and country can be instructive for managers. Pilot testing and the use of a single continuous measure of brand equity also help managers get the most out of novel approaches in their ever more competitive world. IF YOU TAKE AS A GIVEN - and we do - that companies must build strong brands to be competitive, then you are faced with a simple yet staggering challenge : How? In the United States (as much as in India), mass-media advertising has long been the cornerstone of most brand-building efforts. But that norm is threatening to become obsolete. Fragmentation of media, and media audiences, and rising costs are already inhibiting marketing through traditional mass media like television and print. And new communication channels - which, in some cases, allow individuals to bypass advertising as they peruse entertainment options, obtain information, or shop - are already in use. ...read more.

Hugo Boss's garments are sold in 57 countries, and more than half its sales come from outside Germany, with 20% generated outside Europe. In a 1991 study of men's clothing brands for the German magazine Gehobener Lebensstil, Hugo Boss was the highest ranked for having an aura of exclusivity and for having customers who routinely considered the brand when purchasing clothes. If Hugo Boss's visibility campaign can be called inspired, SMH's efforts to build the Swatch brand are nothing short of brilliant. SMH took Swatch from rooftops to concert halls to ski slopes in a targeted campaign to boost visibility and forge a clear brand image, redefining a product category and reinvigorating the entire Swiss watch industry. In the years just prior to the 1983 Swatch launch, watches were either low cost time measurement instruments or a high cost combination of heirloom and investment. There was little in between. So SMH set out to define the Swatch core identity as a low-cost watch of excellent Swiss quality (rebuilding the good name of Swiss watch manufacturing) with a stylish, fun, youthful, provocative, and joyful brand personality. The concept of a fashion watch was born. From the beginning, SMH made sure that Swatch messages were driven by that strong brand identity. For its launch in Germany, the company hung giant 165-meter ''watches" from city skyscrapers with signs that read, "Swiss, Swatch, DM 60". In Spain and Japan, SMH used similar publicity stunts. For Swatch, the medium was, in part, the message in that it helped to communicate the brand identity. Sponsorship, too, was carefully planned to bolster the brand's image among concentrated groups of potential target customers. In Breckenridge, Colorado, for example, Swatch backed skiing's Freestyle World Cup. In New York City, the company organised the Swatch World Break-Dancing Championship. In London, it sponsored Andrew Logan's Alternative Miss World show- and in Paris, a street-painting contest. ...read more.

Developing a set of alternative approaches to branding building isn't easy, particularly for companies that have long relied on media buys as the cornerstone of their brand-building efforts. But with dedication and commitment from senior managers, alternatives can be worth the time and investment. We recommend that managers study the brand building methods of companies outside their industry and outside their country. Creative approaches used by companies in other fields or other markets may suggest effective brand-building techniques that also provide differentiation from competitors. In-house capability in the lead media is important for real and sustainable competitive advantage. If the lead media implementation is outsourced, it easity can be copied. When it is actively managed internally, as was the case with the Buitoni direct-marketing effort, the Cadbury theme park, the Hugo Boss event-sponsorship program, the Swatch events, the Body Shop's activism, and the Haagen-Dazs sampling effort, then the resulting effectiveness and efficiency of the program can represent significant barriers to competitors. One person or team inside the organization should have the responsibility for the brand. The charge is to create a strong, clear, rich identity and to make sure that the implementation groups, whether inside or outside the company, understand that identity. When alternatives to mass-media advertising are driving the brand-building process or playing a substantial role, it is particularly important to have a brand champion with the ability, authority, and incentive to ensure that the brand identity is being delivered consistently across multiple media. We suggest pilot tests to learn firsthand what works and what does not and to gain confidence in programs that are novel and seem risky. The Swatch and Haagen-Dazs programs both benefited from pilot testing. Finally, managers should monitor the results of the effort. A single and continuous measure of brand equity helps companies understand clearly the contribution of alternative-communication vehicles in building brands. And careful monitoring can reveal how to expand those vehicles to serve the company best. ________________________________________________________________ (Source : Harvard Business Review on Brand Management, Harvard Business School Press, 1999 ). ...read more.