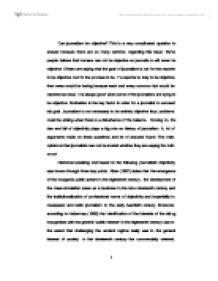 Can journalism be objective?

Can journalism be objective? This is a very complicated question to answer because there are so many opinions regarding this issue. Some people believe that humans can not be objective so journalism will never be objective. Others are saying that the goal of journalism is not for the reporter to be objective, but for the process to be. If a reporter is truly to be objective, then news would be boring because each and every common fact would be reported as news. It is always good when some of the journalists are trying to be objective. Motivation is the key factor in order for a journalist to succeed his goal. Journalism is not necessary to be entirely objective thus; problems could be arising when there is a disturbance of the balance. Moving on, the rise and fall of objectivity plays a big role on history of journalism. A, lot of arguments made on these questions and lot of answers found. The main opinion is that journalists can not be trusted whether they are saying the truth or not. Historical speaking and based on the following, journalistic objectivity was known through three key points. Allan (1997) states that the emergence of the bourgeois public sphere in the eighteenth century, the development of the mass-circulation press as a business in the late nineteenth century and the institutionalization of professional norms of objectivity and impartiality in newspaper and radio journalism in the early twentieth century. ...read more.

Objectivity means based on facts or evidence, not feelings or opinion. Objectivity requires evidence and verification. It is more than just attempting to be neutral (Sambrook, 2004). There is an objective standard of truth in the news. In the real world, news is the product of conscious and unconscious choices made by editors and producers, reflecting all sorts of biases and pressures. News values provide the criteria in the routine practices of journalism which enable journalists, editors and newsmen to decide routinely and regularly which stories are worthy and which are not, which stories are major lead stories and which are relatively insignificant, which stories to run and which to drop. People who were against of objective journalism argue that pure objectivity is unobtainable and that the notion of objectivity is, at best, a shield devised by corporate America to insure a sanitized version of the truth, and at worst, an ideological weapon used to maintain the status (Streckfuss, 1990). However, objective journalism as technique avoids this philosophical debate and concentrates on the means and values of the approach. It is the practices employed to achieve this unobtainable goal which become most important (Streckfuss, 1990). Objective journalism as a technique is based both on the original meaning (Lippmann, 1963) and the more recent practice of this form of studying each of these aspects is essential to understanding the values and means of this form of journalism. ...read more.

"We are not going to endanger the lives of our people just to let journalists in." Israel began restricting media access to Gaza after the six-month ceasefire with Hamas began unravelling on 4 November. But a high court challenge by the Foreign Press Association resulted in a compromise in which eight members of the media were to be allowed in when the Erez crossing was opened for humanitarian reasons. During the case the military had told the court it was too dangerous to allow journalists in. Under the agreed arrangement, aborted yesterday, the FPA was allowed to select six journalists by lottery and submit the names to Israel for vetting. Israel selected the other two journalists. In this first pool it chose people from NBC and Fox news, which is pro-Israel''. Situations like that are especially difficult because you have different sources telling you different things and it comes down to compare which has more truth, if even incomplete. As mentioned above, there will be lots of opinions whether journalism is objective or not. Moreover, based on the above journalism history a lot of argues had made and change the way journalist are now covering news and events but still not many people can trust them anymore, not even nations. What if what we want is not objective journalism at all? News can not exist without definition, and as soon as it is defined it becomes partial. Without definition it has no social context. Without social context it means nothing. ...read more.