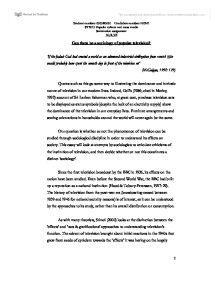 Can there be a sociology of popular television?

Can there be a sociology of popular television? 'If the Judaic God had created a world as an advanced industrial civilization from scratch (s)he would probably have spent the seventh day in front of the television set' (McGuigan, 1992: 129) Quotes such as this go some way to illustrating the dominance and intrinsic nature of television in our modern lives. Indeed, Gell's (1986; cited in Morley, 1992) account of Sri Lankan fisherman who, at great cost, purchase television sets to be displayed as status symbols [despite the lack of an electricity supply] show the dominance of the television in our everyday lives. Furniture arrangements and seating orientations in households around the world will never again be the same. Our question is whether or not the phenomenon of television can be studied through sociological discipline in order to understand its effects on society. This essay will look at attempts by sociologists to articulate criticisms of the institution of television, and then decide whether or not this constitutes a distinct 'sociology'. Since the first television broadcast by the BBC in 1936, its effects on the nation have been studied. Even before the Second World War, the BBC had built up a reputation as a national institution (Hood & Tobary-Peterssen, 1997: 29). The history of television from the post-war era (broadcasting ceased between 1939 and 1946 for national security reasons) ...read more.

and Cumberbach's (1986; ibid.) theories that extend the mental model of television. Both theorists followed the general theme that 'bias lies in the eye of the beholder', which Philo further criticises: 'We can accept that what people understand and believe is not simply a result of what they are told by the media. But there are problems... where do frameworks of belief come from? How do they develop over time? (Philo, 1990: 6) In other words, by questioning the effects of television, and the way we treat the function of its influence, we open the sociological discipline up to huge philosophical debates about the individual and the existence of the Lockian tabula rasa. Hence, at this point it is courtesy to return out sociological essay back to specific examples of the study of television in society. One British proponent, Nicholas Abercrombie, focuses on the sheer importance of television: 'Our everyday lives are so interwoven with the media that we are scarcely aware of them... Indeed, television is central to modern society altogether' (Abercrombie, 1996: 2) This is not to say that just because so many theorists attach great significance to television, there should be a specific domain aside for it, but in traditional sociological method, contentment has been the enemy of invention. ...read more.

This is not to say that soaps epitomise postmodernism, but that in its fragmented yet established self-parodying basis, contemporary television cannot help but conform to stereotype-based reality-blurring prescriptions. This essay has hopefully illustrated the wealth of literature that is already established in the field of cultural and mass media studies on television. Our answer as to whether or not a true 'sociology' exists was never really an issue, as conscious efforts to decide if sociological discipline should be employed only incite dithering around the subject. The deeper question implied her is 'if so... how can it be studied?' While a simple answer is not given here, a glance over the ideas of the old 'effects' and 'uses & gratifications' approaches leads us to the conclusion that a unified paradigm of study is applicable in this case. A look at the psychological research into 'flashbulb memories' will provide a fitting d�nouement to this discussion. Atkinson et al (1993) describe how the image domination so topical for this of War coverage on television leads us not to ask 'where were you when... [JFK was shot, the statue of Saddam in Baghdad was torn down]', but more accurately 'which television screen were you watching when... happened?' Denying that a sociology of television exists would be a folly, considering the evidence of such a social importance of the media form. ...read more.