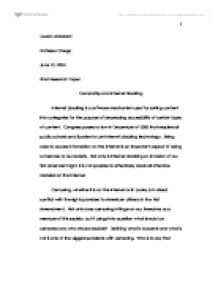 Lauren Anderson Professor Onega June 10, 2004 Final Research Paper Censorship and Internet Blocking Internet blocking is a software mechanism used for sorting content into categories for the purpose of decreasing accessibility of certain types of content. Congress passed a law in December of 2000 that requires all public schools and libraries to use Internet blocking technology. Being able to access information on the Internet is an important aspect of being a member or our society. Not only is Internet blocking an invasion of our first amendent right, it is not possible to effectively block all offensive material on the Internet. Censoring, whether it is on the Internet or in books, is in direct conflict with the rights provided to American citizens in the First Amendment. Not only does censoring infringe on our freedoms as a member of this society, but it brings into question what should be censored and who should decide? Defining what is obscene and what is not is one of the biggest problems with censoring. Who is to say that something that offends one person or group of people will offend everyone? By calling something obscene it is being defined under legal terms, it does not make any statements about the nature or character or the item in question. ...read more.

The websites that are blocked is even kept a secret from those using the blocking technology. There is only one blocking company that makes list of the blocked sites available to their customers or the general public (www.eff.org). The criterion that is used to decide what should be blocked is vaguely defined and subjectively applied to everyone who accesses the Internet. Instead of being customized and designed to meet the needs of particular communities, blocking technologies group all Internet users together into one group and provide the same blocks for everyone (www.eff.org). Blocking technology companies make many mistakes in assigning websites to block lists and almost always rely on automated systems for making content decisions. Blocking technologies tend to be error-prone. There are no effective means to check whether a website was correctly assigned to a block list or to override the blocking. There is also no way to appeal the multitude of incorrect decisions made by blocking technology companies (www.eff.org). When the U.S. government requires blocking in public schools and libraries, the government mandates censorship in direct conflict with the U.S. Constitutional guarantees to free expression and freedom of association. Laws prohibiting the production and distribution of child pornography and obscenity already apply to the Internet. ...read more.

The first amendment gives poeple the freedom to say what they think without retributions from those who do not share their opinion. Internet blocking puts a limit on this right. It makes the first amendment mean that people are free to express themselves as long as it is not offensive to others. If something is offensive to someone, they should not look at it. It is not fair to take away one group's rights to appease another group. The national government should not be the one to choose what citizens have access to online. If parents want to block certain websites, that is their prerogative and they should be able to do so in their home but the government should not take these rights away. It is not fair for Congress to pass laws taking away rights that have been stated for years and years in the Constitution. If a school district decides to use Internet blocks they should be able to do so, but they should not be forced because effective blocks will take away many priceless sources of information from their students. People are responsible for what they choose to do, say, and view. It should not be up to the federal government to decide for the country what is suitable online and what is not. ...read more.