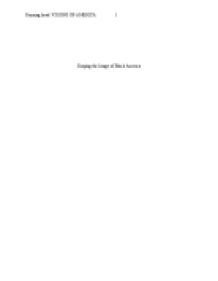 Changing Images of Black Americans in US Television since the 1950s.

﻿Running head: VISIONS OF AMERICA Shaping the Image of Black America ________________ I did not think much about the topic of Black America and how it was stereotyped when I was younger and watching television shows from the past. I just accepted it as it was just the way it was back then. I remember most clearly in Shirley Temple movies the role of servants and ?mammy?s? and how their characters were the backbone of the white families that they cared for. They played important roles in their families but not valued as equals. ?These black folk could be trusted to manage white households, nurture white children, and ?restore balance and normalcy to the white household,? . ...read more.

Shows such as Amos and Andy, Beulah, The Jack Benny Show and Life with Father depicted black culture as subservient characters such as maids, mammies or con artists and deadbeats which was why these two worlds were viewed as separate and unequal. (Franz & Smulyan, 2012) Towards the end of the 50s and throughout the 60s, programming changed and ?network television offered more benign and less explicitly stereotypical images of African Americans? (Franz & Smulyan, 2012). Shows like The Nat King Cole Show, Julia and I Spy made their skin color a minimal if any part of the show and not necessarily part of the storyline. This existed during a time where tensions still existed between the different races in a white world where both races did not acknowledge ?blackness? (Franz & Smulyan, 2012). ...read more.

I grew up watching the Cosby Show which depicted a normal family and covered diverse topics each week that anyone could relate to. Black America was shown in an equal way where education, career and family were important values where earlier television depicted them as subservient roles. ?Cosby?s characters and the situations in which they appear depict people with a distinct ethnic background coupled with universal appeal (Merritt, 1991). Bill Cosby actually drew a lot of the weekly storylines from his own life. He showed flawed characters that were likeable which made them easy to identify with no matter what a viewer?s background was. His humor does not involve race, only stories of real life. I cannot remember thinking of The Cosby Show as a show about a black American family ? it was just a family similar to mine with similar experiences. ...read more.