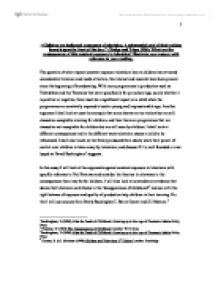 ''Children are dedicated consumers of television. A substantial part of their waking hours is spent in front of the box.'' (Hodge and Tripp 1996). What are the consequences of this constant exposure to television?

''Children are dedicated consumers of television. A substantial part of their waking hours is spent in front of the box.'' (Hodge and Tripp 1996). What are the consequences of this constant exposure to television? Illustrate your answer with reference to your reading. The question of what impact constant exposure television has on children has attracted considerable literature and media attention, this interest and research have been present since the beginning of broadcasting. With more programmes in production such as Teletubbies and the Tweenies that cater specifically for pre school age, surely whether it is positive or negative, there must be a significant impact on a child when the programmes are constantly exposed at such a young and impressionable age. Another argument I shall look at uses the example that some shows are too violent but are still classed as acceptable viewing for children, and then there are programmes that are classed as not acceptable for children but are still seen by children. I shall look at different consequences and in the different ways television causes a child to be influenced. I shall also touch on the frenzy produced from adults when their power of control over children is taken away by television, and discuss if it is well founded or over hyped as David Buckingham1 suggests. ...read more.

The Teletubbies came under fire for exactly this, for their non-comprehensible language and for targeting an audience that should not be distracted by television but should be learning through play. A newspaper article on Thursday 22nd April pg. 5, contained the title 'Clean up the Soaps.' A study called 'Is Television Special- A Review of Public Service Broadcasting'9, done by the broadcasting watchdog Ofcom criticised the pre-watershed programmes, especially Soaps, of producing too much violence, sex and drug use. On the subject of pre- bedtime viewing being safe for youngsters 'the regulator found a comparatively low number of viewers thought terrestrial TV was succeeding in this area.' Soaps now account for 55% of drama, compared with 47% in 1998. Reality shows have increased by 20% and the number of prime time art shows has fallen by 17% in 5 years.10 This is frightening evidence for Postman, his followers and politicians alike to prove that the programmes that children are available to are of poor quality and therefore could be stunting intellectual learning. Concern about the impact of television on the lives of children has and will be in the media for a long time. There is however research to show the positive consequences from television for children. There is now a growing sense that TV can be successful in educating children, as it is able to show images and information that may be unavailable to them through other sources and can help give deeper understanding. ...read more.