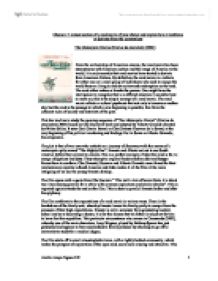 Choose a 7-minute section of a road movie of your choice and explain how it conforms or deviates from the conventions The Motorcycle Diaries (Diarios de otocicleta) (2004) From the earliest days of American cinema, the road movie has been synonymous with American culture and the image of America to the world, it is only recently that road movies have started to deviate from American Culture. By definition, the road movie is a vehicle for either one or a small group of individuals who seek to escape the world they are living in and set out towards redemption on the road. The road either makes or breaks the person. One might have the intelligence to recognise that in a difficult situation it would be best to move on, this is the simple concept of a road movie. The road movie reflects a cultural psychosis that not only is tomorrow another day, but the road is the passage to which a new beginning is possible, free from the coherent rules of society and restraints of the past. This has lead me to study the opening sequence of "The Motorcycle Diaries" (Diarios de otocicleta) (2004) based on Che Guevara's book and adapted by Alberto Granado directed by Walter Salles. ...read more.

and a confident beautiful 'older' woman Luisa Cortes (Maribel Verdu) take a trip of sexual discovery and enlightenment. It is social commentary on the lives of the young men, their feelings and political awakenings, but also we see the real Mexico, its complexities and sharp contrasts between the rich and the poor. This exploration of culture and the meticulous planning that goes into it is of course rather ironic as the characters always seem to go searching for adventure and to escape small town life, only to realise that they are homesick as "The Wizard of Oz (1939)" clearly illustrates. Dorothy Gale played by Judy Garland embarks on a magical journey on the yellow brick road to see the Wizard of Oz, only to realise that she misses the bleakness and dull nature of her home back in Kansas. She goes on to quote one of the movies most memorable lines "There's no place like home". In the "The Motorcycle Diaries" Ernesto becomes very homesick during various parts of the film especially the two are strapped for cash and have nowhere to stay. They face various physical and emotion obstacles, another typical characteristic of the road movie genre. Ernesto and Alberto set out on their travels on one old motorbike ironically named "The Mighty One". ...read more.

This is heavily contrasted by Alberto, the older partner who sets out to complete the journey before his 30th birthday and is only looking to "get laid in every country in south America". The contrast of the two leads is not an uncommon feature in road movies, but the seriousness of one character and the carefree nature of the other often provide light humour. An excellent example of this kind of relationship is that between Wyatt (Captain America) and Billy (The Kid) in Hopper's Easy Rider. Wyatt, played by Peter Fonda is the cool, composed and collected elder of the two, whereas Billy is reckless and often rash in his actions. "The Motorcycle Diaries" also features a classic open shot of the road about 7 minutes into the film, a highly distinguishable feature of the road movie; depicting vast expanses and unexplored possibilities. "Easy Rider" and "The Straight Story" again prominently features many long camera shots of this kind. "The Motorcycle Diaries" conforms to road movie tradition. In doing this, it manages to perfectly encapsulate what a road movie should be. A brilliantly shot, contemporary film which makes the audience at hand consider their somewhat mundane existence, unchallenging surroundings and the restraints of society. It challenges the viewpoints of the characters in the beginning of the film and slowly but surely they take us along on the journey to discover the "meaning of life". Word count: 1,680 ?? ?? ?? ?? 1 Amille Jampa-Ngoen 12F ...read more.