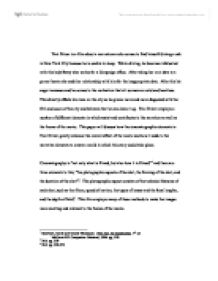 Taxi Driver is a film about a war veteran who comes to find himself driving a cab in New York City because he is unable to sleep. While driving, he becomes infatuated with this lady Betsy who works for a Campaign office. After taking her on a date to a porno theatre she ends her relationship with him for the inappropriate date. After this his anger increases and he comes to the realization that all women are cold and heartless. This directly affects his view on the city as he grows more and more disgusted with the filth and scum of the city and believes that he can clean it up. Taxi Driver employs a number of different elements in which assist and contributes to the narration as well as the theme of the movie. This paper will discuss how the cinematographic elements in Taxi Driver greatly enhance the overall affect of the movie and how it adds to the narrative elements to create a world in which this story could take place. Cinematography is "not only what is filmed, but also how it is filmed"1 and there are three elements to this; "the photographic aspects of the shot, the framing of the shot, and the duration of the shot"2. The photographic aspect consists of the technical features of each shot, such as the filters, speed of motion, the types of lenses and the focal lengths, and the depth of field3. ...read more.

Framing consists of the size or shape of the frame, angle, level or height of the shot, and mobile shots or framing, and the use of space on the screen. A great example of framing is in the beginning of the movie when Travis goes to the porno movie theatre. While he is ending his conversation with the girl at the counter he walks through the shot while it zooms in the on the projector eye piece to reveals the porno that is showing in that theatre. This is a great transition technique to tie one scene to another. It also illustrates how depraved Travis's character is and that he really has no right to judge the lives of other people. Many times throughout this movie the Taxi is framed by doorways that lead to his cab. For example, during the robbery, or when he is trying to reconcile with Betsy on the phone his car is framed by the door almost as his only escape. Many shots in this film are also framed by the taxi cab windows. For example one rally for Senator Palentine is framed by the window. We can only see what Travis is able to see. Another way in which this movie frames its shots is through the use of the rear view mirror. ...read more.

The rapid succession of shots allows the audience to know that Travis is going to use his weapons to rid the city of the scum around him. In conclusion, much of what is placed in the shots and how they are shot provide a great deal of information to the audience about a characters state on mind as well as the world around them. The duration of the shot can change the mood or theme of any character. The framing of a shot can provide valuable background information that is visually appealing. In this movie there is a progression on his wall of his mementoes. Even in the end of the movie he is proud of all the he did and posted the articles about himself on the walls. This information was important in understanding what he was going to do and why. The types of shots chosen in Taxi Driver tell you a great deal about how important the character is or how plain their personality is as well as Travis' feelings toward them. It also tells you what is important about the characters life. 1 Bordwell, David and Kristin Thompson. Film Art: An Introduction. 7th ed. McGraw-Hill Companies: Montreal, 2004. pg. 229. 2 Ibid. pg. 229 3 Ibid. pg. 229-252 4 Ibid pg 233. 5 Ibid. pg. 234 6 Ibid. pg. 242 7 Ibid. pg. 252 8 Scorsese, Martin. Taxi Driver. Columbia Pictures: 1990 ?? ?? ?? ?? ...read more.