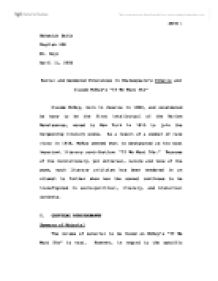 Claude McKay's &quot;If We Must Die,&quot; considered by many to be the &quot;inaugural address of the Harlem Renaissance,&quot; speaks to the traditional ideal of black masculinity

Nehemiah Smith English 408 Mr. Hoyt April 11, 2003 Racial and Gendered Utterances in Shakespeare's Othello and Claude McKay's "If We Must Die" Claude McKay, born in Jamaica in 1890, and considered by many to be the first intellectual of the Harlem Renaissance, moved to New York in 1915 to join the burgeoning literary scene. As a result of a summer of race riots in 1919, McKay penned what is designated as his most important literary contribution: "If We Must Die." Because of the revolutionary, yet universal, nature and tone of the poem, much literary criticism has been rendered in an attempt to further show how the sonnet continues to be transfigured in socio-political, literary, and historical contexts. I. CRITICAL BIBLIOGRAPHY Summary of Material The volume of material to be found on McKay's "If We Must Die" is vast. However, in regard to the specific thesis of this paper, the information is limited. This is perhaps due to the lack of specific insights into the affects of the work within the context of women's issues and the absence of any research on how the work was received in the white literary circles of the time. Claude McKay's "If We Must Die," considered by many to be the "inaugural address of the Harlem Renaissance," speaks to the traditional ideal of black masculinity while simultaneously demonstrating the tension between racial and gendered utterances. Women's suffrage was in its infancy and the literary world's regard for Black or ethnic literature was almost non-existent. ...read more.

Abstract Gloster, Hugh M. "Fiction of the Negro Renascence: The Van Vechten Vogue." Chapel Hill: The University of North Carolina Press, 1948. Gloster's discussion of McKay's works conclude that he capitalized on the sex, exaggeration, and libertinism that was first utilized by Carl Van Vechten in his novel Nigger Heaven. Bronz, Stephen H. Roots of Negro Consciousness, The 1920s: Three Harlem Renaissance Authors. New York: Libra, 1964. Discussion of the major events in McKay's life and an analysis of their effect on his work. Bronz traces McKay's poetry, fiction, and prose within the context of his life: his Jamaican heritage; his immigration to the United States; his reaction to American racism; his expatriate years in Russia, Europe, and Northern Africa; and his eventual return to America as a forgotten writer. Keller, James R. "'A Chafing Savage, Down the Decent Street:' The Politics of Compromise in Claude McKay's Protest Sonnets." African American Review Aug. 1994: The contrast between form and content in McKay's Protest sonnets. The author sheds light on the fact that McKay uses the Romantic Sonnet to express revolutionary ideas. III. Sources, Influences, and Reputation of the Work McKay understood that image was important to Black Americans, and so he projected an image of fearless Black masculinity. He viewed Black people as living in a white world and when he considered that the Black man sees white cultural images projected upon the whole extent of his universe, he could not help but realize that a very great deal of the time the Black male sees a zero image of himself. ...read more.

"If We Must Die" reflects the author's acrimony toward the lynchers of Black men and women during the summer of 1919. Written during an epidemic of race riots that swept the country during that year, its theme is fight to the death, do not take a beating lying down. Though the language of the poem is distinctly masculine it does not imply race. However, because of the racial climate of the time, it became the rallying cry for Black people during the early 1920s. It would later become a rallying cry for the British during World War II; and even later the revolutionary cry of the Black militants of the 1970s. McKay took on a tremendous task when he chose to be the leading revolutionary voice of an oppressed people. Thus, the question arises whether a poet loses his effectiveness when he champions the problem of fighting. In the case of McKay, what he has had to say is important. Some who attempted to address the race problem were successful, others were not. McKay stands triumphant. Although he was frequently concerned with the race problem, his style remains lucid. That "If We Must Die" succeeds in speaking for and reaching a mass audience is by surprise and not by calculation. Its flaws in relation to gender and race are incidental and therefore, must ultimately be overlooked. So that those who make the arguments that the medium he chose was too small, or too large for his message or that the language is sexist or inherently racial are mistaken. McKay was and continues to be heard. ...read more.