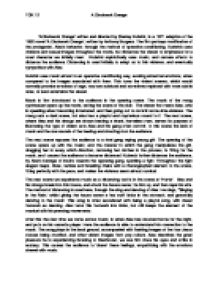 'AClockwork Orange' written and directed by Stanley Kubrick, is a 1971 adaption of the 1962 novel 'A Clockwork Orange', written by Anthony Burgess. The film portrays modification of the protagonist, Alex's behavior, through the method of operative conditioning. Kurbrick uses violence and sexual images throughout the movie, but distances the viewer to emphasize for a cruel character we initially meet. Krubrick sophistically uses music, and camera effects to distance the audience. Distancing is used initially to adapt us to this violence, and eventually sympathize with Alex. Kubrick uses music almost in an operative conditioning way, evoking abnormal emotions, when compared to the images associated with them. This turns the violent scenes, which would normally provoke emotions of rage, now are subdued and sometimes replaced with more subtle ones, or even entertains the viewer. Music is first introduced to the audience in the opening scene. The music of the moog synthesizer opens up the movie, setting the scene of the club. The viewer first meets Alex, who is speaking about becoming intoxicated, and then going out to commit some ultra-violence. The moog sets a dark scene, but also has a playful and mysterious sound to it. The next scene, where Alex and his droogs are shown beating a drunk, homeless man, serves its purpose of illustrating the type of violent acts Alex and his gang often commit. ...read more.

During the initial prison sequence, it appears as if Alex has already started his self-rehabilitation, turning to the bible for the answers, and befriending the pastor. The audience is likely to view Alex as someone who is becoming a changed person, but this is idea is quickly suppressed when Alex visualizes himself in bible scenes, committing these acts of holy violence. At first when Alex is exposed to this experiment, the audience doesn't sympathize with Alex, as he positively responds to the violent and sexual images being shown on screen. Once the effects of the drugs start to kick in, Alex sees the altered paradigm of these images and starts to feel sick, and cannot stand watch, and lets of screeches of pain, making the viewer feel uncomfortable. The viewer further sympathizes with Alex, when he realizes that the music he once loved is being played in conjunction with these disturbing images. Kubrick uses this direct torture scene, to show the extent of cruelty Alex went through in order to be conditioned and even gives the audience a glimpse at the images, even further connecting them with Alex. The viewer sees Alex again, this time two years after the treatment. ...read more.

This could be said that Kubrick used this sequence to illustrate how unaware Alex is of his past life, and how violence has been completely removed from his life, and he is now under the control of the conditioning. Once the housekeeper composes himself he calls two of his friends for dinner and serves Alex some spaghetti. Through the attitude and facial expression of the house owner, the audience is aware of the anger he is experiencing sitting across from Alex. Alex seems to take little notice to this, but is only somewhat hesitant when offered wine, and more wine, but politely drinks it. Alex is then drugged and the scene ends. Alex wakes up in a bedroom. The first thing to happen be Beethoven's 9th is played. Alex's conditioning has caused him to associate this song with violence, as this was a background track to the images Alex viewed during his conditioning. At this point Alex can't stand the torture of the music, and jumps out of a window. Kubrick here connects the audience with Alex, by simulating a first person point of view of Alex's attempted suicide. The closing scene has Alex in the hospital in bed. He is approached by a nurse and is asked to answer a few physiological evaluating questions. ...read more.