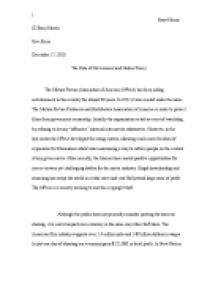 COICA. The Role of the US Government and Online Piracy

﻿Bray-Morris JD Bray-Morris Gov./Econ December 17, 2010 The Role of Government and Online Piracy The Motion Picture Association of America (MPAA) has been aiding entertainment in this country for almost 90 years. In 1922 it was created under the name The Motion Picture Producers and Distributors Association of America in order to protect films from government censorship. Initially the organization acted as a sort of watchdog, by refusing to let any ?offensive? material into movies whatsoever. However, in the late sixties the MPAA developed the rating system, allowing much more freedom of expression for filmmakers whilst also maintaining a way to inform people on the content of any given movie. More recently, the Internet has created positive opportunities for movie viewers yet challenging battles for the movie industry. Illegal downloading and streaming has swept the world in a tidal wave and cost Hollywood large sums of profit. The MPAA is currently working to end this copyright theft. Although the public does not generally consider pirating the same as stealing, it is; and it impacts our economy in the same way other theft does. The American film industry supports over 2.4 million jobs and 140 billion dollars in wages. In just one day of shooting our economy gains $225,000 in local profit. In New Mexico alone the industry provides 4,055 jobs and $146.8 million in wages. It also accounts for 15.7 billion dollars in public revenue through federal taxation. Although these are tough economic times even for a successful industry like Hollywood, they cannot compete with free illegal alternatives such as torrent sites. In 2005 the estimated total loss due to pirating is around $22 Billion (Castro, 1). ...read more.

In his description of these rules he said, ?The first says broadband providers cannot discriminate against particular Internet content or applications. The second says broadband providers must be transparent about their network management practices. These principles would apply to the Internet however it is accessed, though how they apply may differ depending on the access platform or technology used? (Obama). So it appeared he was saying that there could be no censorship at all in order to preserve a free and open web? a policy that would be principally antithetical to COICA. But then he goes on to say, ?Of course, network operators will be permitted to implement reasonable network management practices to address issues such as spam, address copyright infringement, and otherwise ensure a safe and secure network for all users? (Obama). There he did cite copyright infringement as a problem that ?of course? needs to be addressed. I believe Obama?s choice to publically promote Open Internet before backing a piece of legislation like COICA, was a good one. The President understands that the media and the people see COICA as a grab for power and control instead of what it really is? an advancement of justice. Strategically, he needs to show America that he supports and protects free enterprise before he can safely endorse this Bill. Julius Genachowski, chairman of the FCC, seems to be acting as Obama?s puppet in this endeavor by using the same rhetoric and diction. This makes his personal motives and priorities hard to identify. We do know however that he is very well educated and experience in law and business. ...read more.

Popular actors and celebrities need to be viewed as civilized and moral people in order to create and maintain a communal/familial reputation. If too many dark headlines surface about nasty divorces, drug addictions, and domestic violence outbursts (etc.) within the LA showbiz community, Hollywood will of course be labeled accordingly. This cannot happen if we want to ally with the general public (a.k.a. the middle class). As of now the movie industry has a decent vantage point. We are lucky to live in a society in which the average income people do not despise the rich and famous. But they will if they have a good reason to. Regardless of how COICA ends up, I am sure we will be seeing some government action against copyright infringement before the end of the decade. There is just too much money being lost for Washington to lend a blind eye. However, the movie industry has never been pitied by congress and I doubt that will change anytime soon. Unless Hollywood can really manifest this new persona that is described earlier, we can expect treatment similar to the 2009 tax cut repeals in the future. So lets step up to the challenge and show America the value of motion pictures! Lets prove to the powers that be that our industry is truly an asset worth protecting. Just as movies made in the U.S. provide over 2.4 million people with well paying jobs, they also spread joy to billions of viewers around the world. The effects of cinema reach far beyond the pocketbooks of producers and the fame of movie stars in Los Angeles. It is an industry that affects everyone in one way or another and unites us through imagery and storytelling. When whole world was watching Avatar? we were all sharing that experience. ...read more.