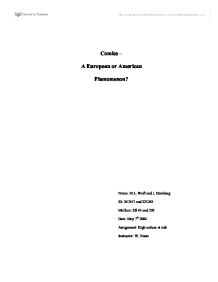 Comics - A European or American Phenomenon?

Comics - A European or American Phenomenon? Name: M.L. Wei� and J. Hamburg ID: 267457 and 223263 Mailbox: ES 43 and 220 Date: May 7th 2004 Assignment: High culture at risk Instructor: W. Nauta In the 1990s, sociologists looking back on the process of globalization, considered whether and if, in how far, a particular nation state could have a leading role in the homogenization of culture. While many scientists, like Featherstone or Smith (cf. Ritzer, 1998, pp. 82-83) deny the dominant role of any nation-state in exporting cultural values, Ritzer and Dezelay argue that "fast-food restaurants and credit cards are beginning to flood the globe, and to bring with them the Americanization of local cultures" (Ritzer, 1998, p. 84). This view is based on Ritzer's earlier concept of "McDonaldization" which he consideres "the process by which the principles of the fast-food restaurant are coming to dominate more and more sectors of American society as well as of the rest of the world" (Ritzer, 1993, p. 1). Since Ritzer emphasizes that 'McDonaldization' aims to the spread of the "means of consumption" (Ritzer, 1998, p. 83) and not to that of certain products, it becomes interesting to examine in how far this concept is applicable to single sectors of popular culture. In this context we focus on comics and we will try to find out if this branch is a truly American phenomenon, or if this can be disproved by discussing the existence of equivalent cultural developments in Europe. ...read more.

In contrast to this we can observe that there did not evolve an immense or overwhelming European comic production in the 1920s which would be equivalent i.e. to the Disney or superhero comics in the United States. Of course, there are popular European comics like the French Asterix or Tintin and the Belgian Smurfs with their distinctive characters. But since the beginning of the twentieth century until today a large number of comics sold in Europe are imports from the United States. One explanation for this might be again the fact that Europeans regarded comics as children's literature. Thus, also European comics targeted to adults were published only in children's magazines and therefore publication brought with it delays and costly censoring (cf. Fuchs, 1972, p. 224). This procedure had the effect that "a series manufactured in a home country was seven times more expensive than an imported one" (Fuchs, 1972, p. 224). Finally, the Second World War caused drastic differences between American and European comic culture. On the one hand, the war brought an end to the trend of the 1920s, when numerous comic series in Europe broke with the tradition of text written under the pictures (cf. Fuchs, 1972, p. 225), starting to use speechballoons, based on the American model. The main reason for this stop in producing modern comics was the prevailing scarcity of raw materials, like paper, the war brought (cf. ...read more.

Third, it is hard to find an equivalent in the United States to the French Asterix, which has a strong satirical character. In this comic, the manners of the different European nations are parodied out of the point of view of the French, who also "parody their own society by delightful allusions" (Fuchs, 1972, p. 245). Furthermore this comic works up the experiences of the French during the Second World War not through heroes fighting against the Nazis like the typical American war comics did, but through the metaphor of the permanent fight of one small gallon village resisting the Romans. Here you can also see the concept of brotherhood (like in the Smurfs comic) as a typical feature of European comics. In the beginning of the history of comics, at the end of the nineteenth century, European comics culture exported its ideas to the United States. American artists developed out of these more popular and appealing methods, while in Europe comic drawers continued to use traditional ones. This "new" American trend started to be used by European artists in the 1920s but they could not devise an own peculiar kind of comic art out of this because of the disruptions of the Second World War. That is why in a way the cultural trends of the postwar years can be considered as an Americanization of the European comic market. Still, the examples of Asterix, Tintin or the Smurfs show that there has as well been a European comic culture, which had distinctive features and was not directly influenced by trends from the United States of America. ...read more.