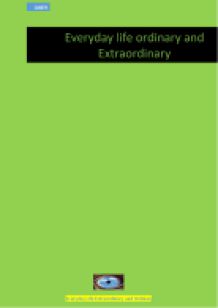 ﻿https://encrypted-tbn1.gstatic.com/images?q=tbn:ANd9GcRfviITHUF-13WG6L5_J3hsjNo9zFLftnmbZoF24Qn9PLp8R0HwoMTXwO8W ________________ Anthropology of everyday life https://encrypted-tbn3.gstatic.com/images?q=tbn:ANd9GcRRuqsQcmb7YWAI_LRl44pVpmXfSM7d5nlPbgsqg3JdjPiAPGE0lg . In the modern world there is such a sphere of reality that are not worthy attention, because they are obvious, and what is more, everyone knows everything about it. Such is the realm of the everyday life, and that is what everyday life is very interesting, because by its obviousness gives the impression of social adjustment habits that cause lack of awareness. Speculation on the nature of everyday life leads to the discovery of what appears to be natural, and they really are the consequences of knowledge and experience over which we do not think, and which the foundations of our behaviour are. The concept of everyday life is accurately described by Roch Sulima in her book ??Antropologia codziennosci? (Anthropology of everyday life)?. He stated that ?everyday life is unavoidable?? (p.20). It is practiced and does not need a definition. The meaning of everyday life is always just ahead as the informal sense of conversation. For everyday there is no return. Immediately melts and solidifies in the myth, in what is discursively inexpressible. Anthropology of everyday life is ?a diary of things," not classic? diary of thoughts" or ideas. He writes it as someone who ?works ?in real life, not a researcher who enters the area from the ethnographic questionnaire with the entirely finished project. No doctrine coordinates irrelevant, but the real ways of coping with everyday life, in such a way that it is now the turn of the centuries. "(p.20) Sulim insisted that he is ?walker? who walks around Warsaw. Sense of observation does not allow her to pass by a graffiti on a wall without paying attention or abandoned car wreck; his mind not escape even the local drunks drinking cheap wine at the corner store. ...read more.

It could be because I was born in era surrounded by technology. When I was ten years old my parents bought me a computer and since then I can?t imagine my life without it. Therefore, I have become dependent if not addicted to, our media sources for information, entertainment and social interaction. I am quite shocked how much time I spent on both my phone and computer. Media have become part of my life and I realized that without them I want be able to communicate with my family and friends overseas. What is more, I want be able to pay my bills or even do my coursework. Nevertheless, some people would think that such a global network with continuous media use is the best growth for a social or informational network. However, technology can be separating. Though using your mobile to keep in touch with people by text feature or keeping in contact via social networking sites can make you more prompt to maintain range of relationship, however such relationships subjected themselves in doubt about the quality and the personal or verbal contact. Marxists' believe that the media create a stimulation of needs and aspirations through their advertisements and this need for commodities produces more money for the capitalists in the world. Media promotes capitalist products. From a Marxists perspective the mass media is the promotion of an ideology of the ruling class. In their eyes the multi-nationals own the media and use it to influence society into brands and lifestyles which they see as 'normal.'(Chandler 2000) Henri Lefebvre writes that mass culture produces images for distortion of the true face of everyday life and thus forms a world of illusory and apparent. ...read more.

Chandlers not only keeps the body alive, but also serves to build social relationships. Particularly interesting is the relationship between mother and child. Miller says that the child takes the place of a partner, who was the subject of devotion and care. Never until now in civilization, was the child not so important. Mothers are puzzled how to select the menu, what clothes to buy, what toys to choose. Many mothers do their shopping especially for their children. One of the ideal models for human consumption is embedded in the concept of naturalness. In other words, the child knows what?s best for him, what and when to eat, when he/she want to sleep. Our role is not to disturb him/her. This means that we give up our dreams, habits or even work. According to Miller, at the beginning it was important deity. Then, under the influence of secularization the place of deity took man, whom in turn dethroned feminism. However, more interestingly, the scheme has not been interrupted. Dedication and attention to women transferred to a child who has become the new deity. https://encrypted-tbn3.gstatic.com/images?q=tbn:ANd9GcTsZpYWIG1jfzcCPm56Z-ZO4NrYlQ8O_3GzbUH9A57fjqbQmoSJ Conclusion: The everyday life has infinitive variety: it is suggestive and vague, it can be distancing or jolly. Everyday life could happen by chance or it might be acquainted and routinized. Your life can be grey or merry and pleasant. It's up to you what life you want to lead. It does depends on you what sort of life you want to lead, because everyone is different surrounded by diverse people and environment thus have dissimilar experiences. However, we all breathe the same air and we all have a need for eat and sleep. We might have conflicting views and different visions on life because each of us is an individual unit. ...read more.