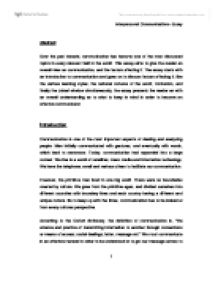 Communication in the modern world.

Abstract Over the past decade, communication has become one of the most discussed topics in every relevant field in the world. This essay aims to give the reader an overall view on communication, and the factors affecting it. The essay starts with an introduction to communication and goes on to discuss factors affecting it, like the various learning styles, the national cultures of the world, motivation, and finally the Johari window simultaneously, the essay presents the reader an with an overall understanding as to what to keep in mind in order to become an effective communicator Introduction Communication is one of the most important aspects of dealing and analyzing people. Man initially communicated with gestures, and eventually with words, which lead to sentences. Today, communication had expanded into a large context. We live in a world of satellites, mass media and information technology. We have the telephone, email and various others to facilitate our communication. However, the primitive man lived in one big world. There were no boundaries created by culture. We grew from the primitive ages, and divided ourselves into different countries with boundary lines and each country having a different and unique culture. So to keep up with the times, communication has to be looked at from every cultures perspective. According to the Oxford dictionary, the definition of communication is, "the science and practice of transmitting information to another through connections or means of access; social dealings; letter, message etc". We must communicate in an effective manner in order to be understood or to get our message across to the other person. One of the basic keys to effective communication is, not to simply hear, but to listen. "The most basic of all human needs is the need to understand and be understood. The best way to understand people is to listen to them"-Ralph Nichols.1 Hearing means when one simply hears the statement and does not let it register. ...read more.

In emotional cultures, feelings are expressed very openly. People are open about their happiness or sadness in a certain situation. They are usually open with one another about their problems and joys and tend to be surrounded by family or friends at most times. They are warm and personal. For example, India and Japan, Diffuse Vs Specific This aspect of cultures is very personality based. Diffuse cultures believe in customising their response or approach when dealing with a particular person or situation. They take time out to know the person they are dealing with. They do keep a few rules in mind, but go out and to have personalised interactions with people. They believe that various people can do a certain job. For example, the Americans follow a diffuse culture. Specific cultures are the ones where everything is followed under rules and regulations. They do not mend them in regard to situations as far as possible. They are mostly inflexible. Example of such a culture is the Chinese. Achievement Vs. Ascription This relates to the value and accordance of status in a culture. The first kind of status is called achieved status and the second ascribed status. While achieved status refers to doing, ascribed status refers to being.(SOURSE) Achievement based cultured believe in giving regard and esteem to a person only when it has been achieved by him/her. People are evaluated on their level of education, achievements and honors earned by them. Ascription based cultures give regard to people on their experiences, age, gender and family status. It sometimes also depends largely on the financial status of a person. Example of Achievement based cultures is one followed by Americans. Here, people are addressed by their first names, and are regarded only on what they have earned in life. Where as a perfect example of an ascription based culture is India. Here, an old person is given a lot of respect because it is considered that he has seen much more than the younger lot. ...read more.

This helps in Self-disclosure. The third, the Blind quadrant, represents those aspects of individuals, which are openly seen by others, but not known by the person himself. For example, you are dining with a group of people in a restaurant, and the person sitting next to you has some sauce on her nose. You can see that, and so can everybody else, but the person in question is not aware of it. An n effective communicator must be able to show people their blind quadrant frankly, which would in turn help the concerned person to be at ease with the communicator. This can be through feedback. The fourth quadrant is the Unknown quadrant is that which is known neither to self nor others. For example being in a completely new situation with other people. You don't know how you are going to react, and neither do the others. This helps in triggering off personal growth. This is very similar to Maslow's concept of self-actualization.11 Keeping in mind all the four sides of the Johari window, an effective communicator must be able to determine the levels of candidness an individual exhibits. Once he is able to establish these, he would be able to put the individual at ease and would thus be able to communicate effectively. Conclusion They say that the world is getting smaller. Global trading is a very important aspect of every economy. This requires dealing with people from different nationalities and different cultures from all over the world. "They may forget what you said, but they will never forget how you made them feel." - Carl W. Buechner 12 Though a large number of communicators are born with inborn strong communication skills, in order to become a successful communicator, one must bear in mind that one could be is dealing with different people with different backgrounds. These people have different learning styles and different Johari windows and different things motivate each one of them. This essay gives an insight to a communicator into all the mentioned aspects, thus leading him to become a successful and effective communicator. ...read more.