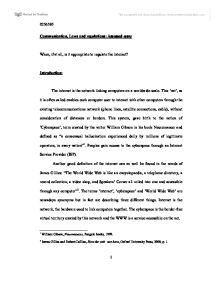 Communication, Laws and regulations - When, if at all, is it appropriate to regulate the internet?

Communication, Laws and regulations: Assessed essay When, if at all, is it appropriate to regulate the internet? Introduction: The internet is the network linking computers on a worldwide scale. This 'net', as it is often called enables each computer user to interact with other computers through the existing telecommunications network (phone lines, satellite connections, cable), without consideration of distances or borders. This system, gave birth to the notion of 'Cyberspace', term created by the writer William Gibson in his book Neuromancer and defined as "a consensual hallucination experienced daily by millions of legitimate operators, in every nation"1. Peoples gain access to the cyberspace through an Internet Service Provider (ISP). Another good definition of the internet can as well be found in the words of James Gillies: "The World Wide Web is like an encyclopaedia, a telephone directory, a record collection, a video shop, and Speakers' Corner all rolled into one and accessible through any computer"2. The terms 'internet', 'cyberspace' and 'World Wide Web' are nowadays synonyms but in fact are describing three different things. Internet is the network, the hardware used to link computers together. The cyberspace is the border-free virtual territory created by this network and the WWW is a service accessible on the net. However, in the following essay, these words will be used as synonyms for the expression "the use of internet" appeals to the accessibility of the content and mainly to the notion of cyberspace. The internet differs from the other types of mass media (TV, radio, newspaper) for it is possible for all users to publish any kind of content. These various contents can be hosted by any ISP. The humongous size of the internet (approximatively 2 billion of publicly accessible web pages3), its exponential growth and the liberated environment it represent make it very difficult to exert any kind of control on the content of the broadcast. ...read more.

This border free environment is triggering a great demand for a set of international rules on the internet, indeed a much more realistic solution for the purpose of regulating cyberspace. A corollary of this absence of boundaries and of diversity of legislations is that it becomes impossible for an internet user to know if the material he dispatches on internet is not illegal somewhere. In fact, with the already quoted example of China, but also Saudi Arabia or Singapore, it actually is nearly impossible not to breach a set of laws when broadcasting material on internet. For example, who knows what impact consulting a syllabus of Human Rights law accessible on a Dutch university site can have on the life and freedom of a Chinese student? Not to talk about moral norms: it might be impossible to surf internet chat rooms without offending someone for such reasons as cultural differences. Amongst the most common breaches of the law on internet, three different kinds must be more closely studied. On the one hand, there are the breaches of privacy. According to American statistics, online, every 79 seconds, a thief steals someone identity, open accounts in the victim's name and goes on a buying spree13. Another example is to be found in so-called petitions distributed throughout the web, under false reasons, in order to collect people's personal information. For example, at the edge of the war in Iraq, a "UN petition" circulated, forcing the UN to open a site denying that they were using internet for the purpose of petitioning14. The same concern occurs with e-commerce and internet consumers. More than just being flooded by publicity, it is about the legitimate fear that companies may gather and sell personal data to others companies, turning these data into a commercial good. Of course, if the only material sold is somebody's address no real harm is caused. But it can be medical data, credit card numbers, insurance numbers or information, etc15...A good example of the foreseeable extremities such behaviour can trigger is to be found in Bruce Sterling's fictions16. ...read more.