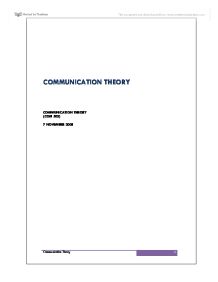 COMMUNICATION THEORY COMMUNICATION THEORY (COM 502) 7 NOVEMBER 2008 INTRODUCTION COMMUNICATION is the process of sharing our ideas, thoughts, and feelings with other people and having those ideas, thoughts, and feelings understood by the people we are talking with. When we communicate we speak, listen, and observe. The way we communicate is a learned style. As children we learn from watching our parents and other adults communicate. As an adult we can learn to improve the way we communicate by observing others who communicate effectively, learning new skills, and practicing those skills. Communication can best be summarized as the transmission of a message from a sender to a receiver in an understandable manner. The importance of effective communication is immeasurable in the world of business and in personal life. Communication is an important aspect in our lives and an even more important aspect in the lives of people who play the roles of leaders. From a business perspective, effective communication is an absolute must, because it commonly accounts for the difference between success and failure or profit and loss. It has become clear that effective business communication is critical to the successful operation of modern enterprise. Every business person needs to understand the fundamentals of effective communication. The field of communications is very broad and thus communication theories also spread over a wide variety of situations. COMMUNICATION PROCESS AND THE KEY ELEMENTS The Communication Process breakdown as follows: A. Sender - The communicator or sender is the person who is sending the message. There are two factors that will determine how effective the communicator will be. The first factor is the communicator's attitude. It must be positive. The second factor is the communicator's selection of meaningful symbols, or selecting the right symbols depending on your audience and the right environment. Talk about a few wrong examples. B. Message - A communication in writing, in speech, or by signals; C. ...read more.

Communication theory will continuously develop in line with the evolution of the communication industry itself. REFERENCES 1. Communication Theories, Origins, Methods, and Uses in the Mass Media, Werner J. Severin, James W. Tankard, Jr. Fifth Edition; 2. http://www.mhhe.com/mayfieldpub/westturner/student_resources/theories.htm 3. Wikipedia, the free encyclopedia; 4. Models of the Communication Process, David Foulger, 2004; 5. Defining Communication Theories http://www.mhhe.com/mayfieldpub/westturner/student_resources/theories.htm; 6. Communication Process, Learning Skills. APPENDIX Defining Communication Theories Cognitive Dissonance Theory Cognitive Dissonance Theory argues that the experience of dissonance (or incompatible beliefs and actions) is aversive and people are highly motivated to avoid it. In their efforts to avoid feelings of dissonance, people will avoid hearing views that oppose their own, change their beliefs to match their actions, and seek reassurance after making a difficult decision. Communication Accommodation Theory This theoretical perspective examines the underlying motivations and consequences of what happens when two speakers shift their communication styles. Communication Accommodation theorists argue that during communication, people will try to accommodate or adjust their style of speaking to others. This is done in two ways: divergence and convergence. Groups with strong ethnic or racial pride often use divergence to highlight group identity. Convergence occurs when there is a strong need for social approval, frequently from powerless individuals. Coordinated Management of Meaning Theorists in Coordinated Management of Meaning believe that in conversation, people co-create meaning by attaining some coherence and coordination. Coherence occurs when stories are told, and coordination exists when stories are lived. CMM focuses on the relationship between an individual and his or her society. Through a hierarchical structure, individuals come to organize the meaning of literally hundreds of messages received throughout a day. Cultivation Analysis This theory argues that television (and other media) plays an extremely important role in how people view their world. According to Cultivation Analysis, in modern Culture most people get much of their information in a mediated fashion rather than through direct experience. ...read more.

Further, meaning is created in the language that people use both with others and in private thought. Language allows people to develop a sense of self and to interact with others in community. Uncertainly Reduction Theory Uncertainty Reduction Theory suggests that when strangers meet, their primary focus is on reducing their levels of uncertainty in the situation. Their levels of uncertainty are located in both behavioral and cognitive realms. That is, they may be unsure of how to behave (or how the other person will behave), and they may also be unsure what they think of the other and what the other person thinks of them. Further, people's uncertainty is both individual level and relational level. People are highly motivated to use communication to reduce their uncertainty according to this theory. Uses and Gratifications Theory Uses and Gratifications theorists explain why people choose and use certain media forms. The theory emphasizes a limited effect position; that is, the media have a limithe effect on their audiences because audiences are able to exercise control over their media. Uses and Gratifications Theory attempts to answer the following: What do people do with the media? http://www.mhhe.com/mayfieldpub/westturner/student_resources/theories.htm Alphabetic list of Theories Adaptive Structuration Theory Agenda-Setting Theory Altercasting Argumenation Theory Attraction-Selection-Attrition Framework Attribution Theory Classical Rhetoric Cognitive Dissonance theory Computer Mediated Communication Contextual Design Coordinated Management of Meaning Cultivation Theory Dependency Theory Diffusion of Innovations Theory Domestication Elaboration Likelihood Model Expectancy Value Theory Framing Gatekeeping Health Belief Model Hypodermic Needle Theory Information Theories Knowledge Gap Language Expectancy Theory Media Richness Theory Medium Theory Mental Models Minimalism Model of Text Comprehension Modernization Theory Network Theory and Analysis Priming Protection Motivation Theory Psycho-Linguistic Theory Reduces Social Cues Approach Semiotic Theories Social Cognitive Theory Social Identity Model of Deindivuation Effects Social Presence Theory Social Support Speech Act Spiral of Silence System Theory Theory of Planned Behavior/ Reasoned Action Transactional Model of Stress and Coping Two Step Flow Theory Uncertainty Reduction Theory Uses and Gratifications Approach ?? ?? ?? ?? Communication Theory 0 ...read more.