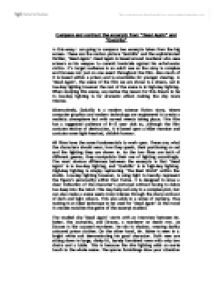 Compare and contrast the excerpts from "Dead Again" and "Godzilla" In this essay I am going to compare two excerpts taken from the big screen. These are the motion picture 'Godzilla' and the sophisticated thriller, 'Dead Again'. Dead Again is based around murderer who uses scissors as his weapon to commit homicide against his unfortunate victim. It's target audience is an adult one as the story is complex and focuses not just on one event throughout the film. Also much of it is based within a prison and is unsuitable for younger viewing. In 'Dead Again', the scene of the film we are shown is a dream, set in low-key lighting however the rest of the scene is in high-key lighting. When studying this scene, we realise the reason for this dream to be in low-key lighting is for dramatic effect making the clip more intense. Alternatively, Godzilla is a modern science fiction story, where computer graphics and modern technology are engineered to create a realistic atmosphere but with surreal events taking place. This film has a suggested audience of 8-12 year olds as, although the film contains section of destruction, it is based upon a killer monster and contains some light-hearted, childish humour. All films have the same fundamentals to work upon. These are; what the characters should wear, how they speak, their positioning on set and the lighting they are shown in. As the two films are both of different genres, they manipulate their use of lighting accordingly. The most obvious difference between the excerpts is that 'Dead Again' is in low-key lighting, and 'Godzilla' is in high-key lighting. High-key lighting is simply replicating 'The Real World' within the studio. Low-key lighting however, is using light to heavily represent the figure's personality within that frame. It is designed to show a clear indication of the character's portrayal without having to delve too deep into the mind. ...read more.

He starts off speaking to Strauss in a casual manner, regardless of the tense atmosphere and is in control. However, as the conversation progresses he becomes a bit shaken by what he has heard and begins to panic. Strauss sees this and uses it to his advantage by confusing him with more riddles and then leaving the room. Baker then becomes panicky and shouts as he tries to stop Strauss from reaching the end of the corridor. The conversation on Mr Baker's behalf is very ordinary in terms of the type of language. He speaks clearly but not in a genteel sort of way and does not use extravagant language. By doing this the audience can relate to him more as a person and it makes conversation more realistic. Strauss, as mentioned before, speaks in riddles. This makes the audience have to think more and they begin to empathise with Mr Baker because they themselves would also like to know if he, Strauss, is the murderer. It is a perplexing way of speaking, yet it leaves them eager to know more. There are a few important props used in the excerpt. They are the hair, scissors and newspaper. Strauss gets his haircut and the hairdresser leaves the hair and scissors on the newspaper. As he leaves the room he subtly removes the scissors from the pile of hair. However once he has left, the journalist gets up, blows the hair away from the paper and glances at the newspaper headlined 'Strauss the scissor killer'. Having seen the headline, Mr Baker figures out what Strauss has done, but could be too late. The hair hides both the newspaper and scissors, delaying the time in which the journalist finds out about Strauss' plans. The newspaper is the last piece of the jigsaw. As he reads it something clicks into place and he realises how significant this paper really is. ...read more.

The audience begin to question whether he will make it in time, and more importantly, they want to know what is in the water. As the wave comes towards the screen it becomes obvious that it is out of the ordinary and something not seen before. This idea is created using special effects for the dinosaur. When Godzilla steps out of the water and on to the road, a large computerized foot is inserted into the frame. Because of the positioning in the frame it looks large and unearthly. Not knowing fully what this creature is adds to the suspense; i.e. what people do not know they tend to be afraid of. Another example of the use of special effects is the colossal green eye. Once Godzilla has crushed the harbour he glares into the eyes of the old man's two friends. His eye itself is both odd in colour and in size. The pupil and iris are yellow and green whilst it is about twice the size of a full-grown man in diameter. The immense size of it belittles both the fishermen and audience. Although in "Dead Again" no special effects are used it has a close up on Strauss' eyes. Even though the eyes themselves are different, they have a similar affect on the audience and other characters. After reviewing the excerpts we have seen of these two films, this week's 'film comparison choice' has been more difficult than ever. That is because we are comparing not only two different genres, but an iconic multi-million pound 'masterpiece' against a film with a much less of a reputation. As with all films, different people will prefer different films for many reasons however in the end we decided that our under-dog 'Dead Again' was a more enjoyable watch. This is due to its brilliant methods of building suspense and really gluing you to your seat. We hope you have enjoyed this week's edition of 'Film Review' brought you to by Adam Harrison. ...read more.