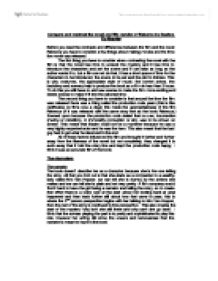 Compare and contrast the novel and film version of Rebecca by Daphne Du Maurier.

Compare and contrast the novel and film version of Rebecca by Daphne Du Maurier Before you read the contrasts and differences between the film and the novel Rebecca you have to consider a few things about making movies and the time the movie was released. The first thing you have to consider when contrasting the novel with the film is that the novel has time to unravel the mystery and it has time to introduce the characters and set the scene and it can take as long as the author wants it to, but a film cannot do that, it has a short space of time for the characters to be introduced, the scene to be set and the plot to thicken. This is why costumes, the appropriate style of music, the correct actors, the backdrop and scenery help to produce the book as a film in less than 2 hours. To do this you still have to add new scenes to make the film more exciting and delete scenes to make it fit into the selected time. The second thing you have to consider is that around the time the film was released there was a thing called the production code years (this is like certificates on films now a days) ...read more.

meant to have in the book Mrs Van hopper Mrs Van hopper, on screen, is very like the character in the book. The same filthy habits and the wastefulness is the same, the way she treats the narrator and her self confidence is the same. The film has done well to create the character as they did because she is very like the book describes her to be. Maxim de winter Maxim is conveyed well from the book to the film. I think this is because the book, I think describes him (and also Mrs Van Hopper) with more detail than some of the other characters, "his face was arresting and sensitive, medieval in some sort of strange way, I was reminded or a portrait I had seen in a gallery once." The film conveyed him exactly as I thought he would look, with a suit and grey hair. His temper was the same in the film and he talked quickly and punctually. The thing that I found was not shown with enough detail in the film was the fact that he treated the narrator like a child and patronised her. I think this could have been conveyed more strongly to give the viewer a clearer idea of there relationship. ...read more.

This means that that Rebecca died some other way, by changing this one thing means that the book is changed some what as it is converted in to the film , because there can no longer be a court case against them because maxim didn't murder Rebecca. There was also little differences such as at the start of the film there was a scene where maxi was about to jump off a cliff and the narrator stopped him, this never happened in the book. In the book where they are driving up Manderly's drive is cut out of the film. I think they should have kept that in the film because it sets the scene around Manderly and it shows how important Manderly is to have such a long drive with a gate man. It also cuts out the bit with all the flowers up the side of the drive - which Rebecca had planted. In the film the dates that maxim takes the narrator on in Monte Carlo are shown, like the dance he took her to, this was not in the book. Also the wedding was filmed, which was not described in the book. 6 years ago another TV version was released. Maxim was the murderer in this version because the production laws have changed since Alfred Hitchcock's version. ...read more.