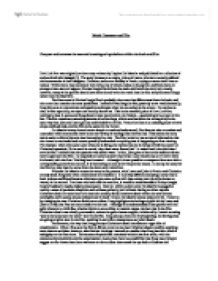 Compare and contrast the uses and meanings of symbolism within the book and film - Don't Look Now by Daphne Du Maurier, published in a collection of stories titled After Midnight

British Literature and Film Compare and contrast the uses and meanings of symbolism within the book and film. Don't Look Now was originally a short story written by Daphne Du Maurier and published in a collection of stories titled After Midnight [1]. The story focuses on a couple, John and Laura, who have recently suffered the bereavement of their daughter, Christine, and are on holiday in Venice, trying to return their lives to normal. While there, they encounter two twins, one of whom claims to be psychic, and from there on strange events start to happen. Nicolas Roeg's film follows the main outline of the story very closely, however, many of the specific details have been altered with the result that the film story becomes Roeg's rather than Du Maurier's. The first scene in Nicolas Roeg's film is probably the scene that differs most from the book, and the scene that contains the most symbolism. Instead of watching the film passively as we would normally, Roeg forces us to concentrate and question and argue what we are seeing on the screen. He teaches us that, in film especially, our eyes can literally deceive us. This is the essential point of Don't Look Now; nothing is what it seems and Roeg doesn't want us to believe the illusion - questioning it is all part of his fun. The film contains an amazing amount of red herrings, which send us down the wrong alley in the same way that John and Laura get lost and blinded in the film. ...read more.

But this needs careful thought - are they actually linked? When John looks up is it because of psychic premonition or is it Roeg trying to trick us into believing something that is not there? After all, we are warned time and again to mistrust what we are told. An interesting difference between the film and the story is the way that Roeg changes the colour of Laura's coat from scarlet to blue. In the story, there is a distinct lack of colour, which lends to Venice a drabness and dullness totally different to the film, where Venice is a gothic masterpiece, beautiful and terrifying in turn. There are very few colours mentioned in the story (red, grey and blue), and red is shown to be positive, unlike in the film where it is negative and predominant. In the story red is associated with Laura due to the emphasis of her coat as red. The colour red also brings back a happy memory for John: "...the little red house where d'Annunzio lived, with it's garden - our house Laura called it, pretending it was theirs". Red is the only colour that is noticeable in the story and maybe this is why Roeg chose to make such an icon of it in his film? Whatever the reason, its role in the film as a colour denoting trouble works much better in its imagery than it does in the story. Throughout the film, Roeg seems to be using red and blue, and the contrast between them, to send us messages about who to trust, and when. ...read more.

She introduces the idea of the inevitability of fate a few times, in a much more subtle way than Roeg. Most of the time the ideas are just simple lines, easy to miss unless you are specifically looking for them: "a flick of the coin between this, Torcello, and driving to Padua, and we had to choose Torcello" and "Why, in the name of hell, should they have picked on this particular spot, in the whole of Venice" illustrate that there is the possibility that there are things working against John and Laura in Venice. Du Maurier does not make a big deal about it and leaves it to the reader to pick up on but there are clues that she believes that fate cannot be fought against. Roeg takes the ideas and themes of Du Maurier's text and both builds upon them and turns them upside down. The result is that we have two very different versions of what is essentially the same story. Roeg's film starts to gain a life of it's own in the audience's mind - it is a film that once seen is not forgotten due to the startling images it leaves. However, at times it sinks into farce: Roeg overreaches himself and the symbolism and attitude of melodrama start to become laughable. Du Maurier is much better at subtly creating a sense of paranoia and danger that might be real or might not. She leaves the reader with a sense of ambiguity that Roeg, in his eagerness to pinpoint his themes, thus misses, not realising that sometimes ambiguity and the fear of the unknown, can be much more frightening than reality. ...read more.