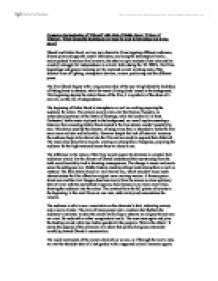 Compare the beginning of 'Ghandi' with that of Robin Hood, 'Prince of Thieves'. What cinematic techniques are used in each to introduce you to the story?

Compare the beginning of 'Ghandi' with that of Robin Hood, 'Prince of Thieves'. What cinematic techniques are used in each to introduce you to the story? Ghandi and Robin Hood, are two very dissimilar films targeting different audiences, diverse plots and opposite central characters; one being the stereotypical heroic, action-packed American family movie; the other an epic account of one man and his country's struggle for independence in colonial India during the 18-1900's. The films beginnings and general meaning will be explored as well as taking note of the director's use of lighting, atmospheric devices, camera positioning and the different paces. The film Ghandi begins with a long camera shot of the sun rising behind the backdrop of fishing boats in shadow, while the tweet of rising birds' sound in the background. This beginning depicts the whole theme of the film; it is symbolic of the dawn of a new era, on the eve of independence. The beginning of Robin Hood is atmospheric as well as exciting preparing the audience for action. The camera slowly roves over the Bayeux Tapestry, an embroidered portrayal of the Battle of Hastings, while the credits roll in front. Orchestral, battle music is played in the background, as a small caption asserting a historical fact connoting Robin Hood existed at the time stated, couldn't possibly be true. This device used by the director, of using a true fact, is intended to make the film seem more realistic and believable. However despite the lack of historical accuracy the audience begin to be drawn into the film and are ready to suspend their disbelief. ...read more.

It is an under shot with the lighting behind, enhancing the largeness and evil appearance of the second guard. As the blade is about to slice the camera swiftly changes position to where the first guard is knelling holding Robin's hand. The music gets louder as Robin pulls the rope. We hear the knife slam down and a wail from the guard, but not Robin. The pace quickens and the music becomes unbearably loud and confusing as Robin snatches the machete from the bench and slices the first guard. The camera shots are changed rapidly as piercing screams, slashing knives and orchestral music sound as Robin and the other prisoners fight their oppressors (the guards). Tension and suspense are at its peak as Robin slashes at the metal chains holding his friend. The camera is at a medium shot, slightly below, making Robin appear taller. The sparks from the machete hitting the metal chains are captured expertly from underneath. The black prisoner calls Robin from behind. The anxiety in the man's voice is prominent as he pleads to be set free. The prisoner behind Robin screams 'the guards are coming'. The atmosphere is charged with nervousness as Robin asks the prisoner why he should set him free. The black prisoner responds, "because if you do not we are all dead men!" This hesitation in action serves to heighten the tenseness to an even greater climax. Robin cuts the rope and all three men depart. Honourable as ever, Robin apologizes to one of the prisoners for not setting him free. ...read more.

This creates a reason for his presence in the film. The director of Robin Hood applied the usual customary mixture of appealing factors to his reproduction: e.g. special effects, popular actors, racial diversity, and all the normal audience pullers. These were all in an attempt to make the film original and modern for a new generation of viewers. Ghandi was in no way a re-make and had never been produced as a movie before, and probably never will be again. It had to be a unique one-off production, which could be used for reference by students etc, of future generations perhaps. The film Ghandi uses no special effects, which illustrates that both films serve different purposes, and are targeted at different audiences. Ghandi begins at the end, at Ghandi's death. Robin Hood begins right at the beginning, with the audience full of suspense as to what will happen. Ghandi isn't a 'quest' film like Robin Hood and has no need to keep the audience, in that particular type of suspense. Both directors use a similar technique at creating suspense, music. Ghandi and Robin Hood are presented as very different heroes. As I've already explained, they both represent diverse characters that demonstrate heroism in different ways. They are both fighting very unalike kinds of 'evil'. Racism and injustice perhaps a lot harder to combat than a rather bizarre Devil-worshipper! Ghandi dies a somewhat disappointing death that doesn't seem fitting to such a great leader of a nation. However Robin Hood isn't shown to die at all. Robin is made out to be almost invincible, while Ghandi is a frail, little brave man who can die simply and quietly like everyone else. By Devon Kennard ...read more.