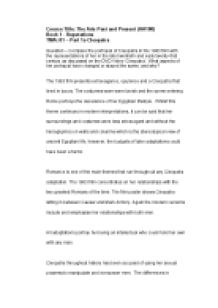 ﻿Course Title: The Arts Past and Present (AA100) Book 1 - Reputations TMA: 01 ? Part 1a Cleopatra Question ? Compare the portrayal of Cleopatra in the 1963 film with the representations of her in the late twentieth and early twenty-first century as discussed on the DVD Video ?Cleopatra?. What aspects of her portrayal have changed or stayed the same, and why? The 1963 film presents extravagance, opulence and a Cleopatra that lived in luxury. The costumes worn were lavish and the scene entering Rome portrays the decadence of her Egyptian lifestyle. Whilst this theme continues in modern interpretations, it can be said that her surroundings and costumes were less extravagant and without the hieroglyphics on walls and columns which is the stereotypical view of ancient Egyptian life, however, the budgets of later adaptations could have been a factor. ...read more.

?Her image has once again been updated to keep in step with the new norms of our society, so Cleopatra retains an image of glamour and seduction but her use of sexuality is more provocative? Cleopatra - (AA100 DVD). This is shown in the television show Xena, she reworks the famous scene when smuggled into visit Caesar as a form of sexual roleplay. In the 1999 series, Cleopatra is seen fighting with a sword castrating her enemy. In the 2005 series Rome she uses sex as a tool to protect her leadership by deliberately becoming pregnant (by another), she passes the child off as Caesar?s. ...read more.

It is almost certain that Cleopatra would have a darker skintone, therefore, the later adaptations would be historically correct. The ethnicity of Cleopatra has come to the fore in the form of Afrocentrism ?an attempt to promote the primacy of African Civilisation? Fear, Trevor: Reputations, Cleopatra, P25. ?The many faces of Cleopatra show how we modify our perceptions of the past to suit contemporary issues? ?Each era has recreated Cleopatra in its own image? Cleopatra - (AA100 DVD). ?we all create our own version of Cleopatra and what we see in her tends to reflect our own cultural traditions? Fear, Trevor: Reputations, Cleopatra, P24. Bibliography Cleopatra (2008) - (AA100 The Arts Past and Present DVD) ? Book 1 Reputations, Milton Keynes The Open University Fear, Trevor (2008): Cleopatra - The Arts Past and Present, Book No. ...read more.