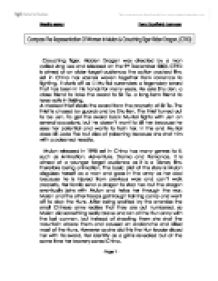 Crouching Tiger, Hidden Dragon was directed by a man called Ang Lee and released on the 9th December 2003. CTHD is aimed at an older target audience; the action packed film, set in China has scenes woven together from romance to fighting. It starts off as Li Mu-Bai surrenders a legendary sword that has been in his hands for many years. He asks Shu-Lien, a close friend to take the sword to Sir Te, a long-term friend to keep safe in Beijing. A masked thief steals the sword from the property of Sir Te. The thief is chased by guards and by Shu-lien. The thief turned out to be Jen. To get the sword back Mu-Bai fights with Jen on several occasions, but he doesn't want to kill her because he sees her potential and wants to train her. In the end Mu-Bai does kill Jade Fox but dies of poisoning because she shot him with a poisoned needle. ...read more.

Unlike a stereotypical Chinese women staying at home taking it easy doing the cleaning and cooking etc, this shows us that Mulan has a lot of courage and is very outgoing this shows us that she isn't a stereotypical Chinese women. Women are also represented negatively in some ways such as I said before staying at home doing the cooking, washing etc instead of being allowed to go to war. Women are also considered to be weaker than men, once again so they are not allowed to be in the army and go to war. I can support this by the scene where Mulan has to steal her father's army gear and disguise her self as a man just to go to war instead of her father. Another negative point to women in Mulan doesn't want to get married and wants to be a free spirit but has to give in and marries the captain, this shows us that women are being ordered/ bossed around and aren't allowed to have a free spirit and choose their own future. ...read more.

in Mulan, Jen proves that she is just as good or better than any other man, she proves this by going into the bar with the green destiny, looking like a man, so everyman in the bar get's up and challenge her to a fight for the green destiny. Jen goes on the beat every man in there and even some at the same time. This is suggesting that woman could be better than men and not to look at them all stereotypically. Basically in my essay I have argued that Mulan and CTHD have represented women as un-stereotypical and a little bit negatively more in CTHD than Mulan. I think I have a good argument here; I think I have proved my point by using the PEA (point, example, analysis) structure to help me explain and get my point across. I have backed all my point with scenes or acts that happened in both films and then analysed it too. ?? ?? ?? ?? Media essay Perry Scofield-Lamoon -Page 1 - ...read more.