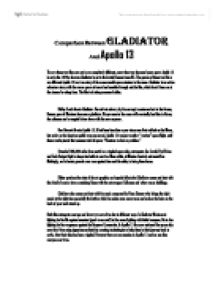 Comparison Between Gladiator And Apollo 13.

Comparison Between Gladiator And Apollo 13 The era these two films are set in are completely different, more than two thousand years apart. Apollo 13 is set in the 1970s whereas Gladiator is set in the brutal Roman times BC. The genres of these two films are different Apollo 13 is a true story of the unsuccessful space mission to the moon. Gladiator is an action adventure story with the roman genre of sword and sandals through out the film, which hasn't been on at the cinema for along time. The film includes gruesome battles. Ridley Scott directs Gladiator. Forced into slavery by the corrupt, incestuous heir to the throne, Roman general Maximus becomes a gladiator. His prowess in the arena will eventually lead him to Rome, the coliseum and a vengeful show down with the new emperor. Ron Howard directs Apollo 13. It had been less than a year since man first walked on the Moon, but as far as the American public was concerned, Apollo 13 was just another "routine" space flight, until these words pieced the immense void of space: "Houston we have a problem." ...read more.

In Apollo 13 the crew onboard the space ship save their lives using ingenious methods by creating technologies to help them in their journey back to earth, after their ship has been crippled. However there are no enemies in Apollo 13 and no one dies everyone survives. Apollo 13 is based on facts, as it is a true story. Gladiator is fiction but it has lots of factual things in it like the way people are treated, also the buildings and government with all its corruption. Apollo 13 is a mainly a scientific film which shows the time it was set in. Whereas Gladiator has lots of religious beliefs involved and superstition foe example every time Maximus goes into battle he rubs the dirt from the ground into his hands. Most of the gladiator film is set in the vast scenic areas of the Roman Empire whereas Apollo 13 mainly takes place in the claustrophobic environment of the spaceship surrounded by the endlessness of space. ...read more.

The audience in Apollo 13, in the 70's, watch the news hoping and preying for the crew to survive. When they did survive there was huge celebration. Both the places the films are in are superpowers of their time. In Gladiator Rome is a superpower of the world with their coliseum and army to show for it. This is shown in the film. In Apollo 13 America is a superpower of the world with the missions to the moon showing this in the film. In both films men are the main characters where in both they are the hero's and villains. The women in both films seem weak characters and cry a lot. The women also play supporting roles, which reflects the roles of women in these times, in society. Both films appeal more to men than woman because of the action, adventure and space genre of the films. Out of the two films I prefer Gladiator because it is more exciting it's on a bigger scale with better graphics and excellent fight scenes. Whereas Apollo 13 is based on technical knowledge and puzzling out. ...read more.

There are some exceptionally insightful observations about the deep similarities between these two ostensibly different films that come close to revealing just how superficial the "huge" differences in setting, plot, etc. actually are in terms of what the films ultimately mean, and who they appeal to.

For this reason, the conclusion is very disappointing. Although a personal appraisal of the relative merit of the two films is sometimes acceptable, especially if the point of the essay is to say which film is preferred and why this is the case, it's usually preferable to conclude a comparative essay by summing up the "essence" of the differences and similarities, and to make some statement about what the differences signify. This essay lays the groundwork for an excellent example of this, and then undoes all of that good work by returning to a rather shallow personal appraisal.