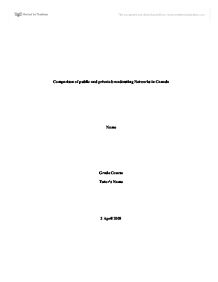 Comparison of public and private broadcasting Networks in Canada

Comparison of public and private broadcasting Networks in Canada Name Grade Course Tutor's Name 3 April 2009 Media systems in Canada: an introduction Canada is largely perceived as a country that is built on communications and communication technology which it depends on a great deal to date 10. It has a media sector that is well developed and which can reach practically every Canadian thereby making it an essential component of Canadian life. The mass media of Canada includes television, magazines, newspapers, books, internet, radio and films which serve several functions such as the provision of information, entertainment, education and advertising. BBG communications (2008) documents that in the broadcasting industry, Canada has a total of 130 VHF and UHF television stations, broadcasting on 1,456 transmitters in the entire country and which are owned both publicly and privately. The Canadian Broadcasting Corporation is a public network which operates in both English and French. Besides CBC, four other private networks also broadcast bilingually. The exclusive English broadcasters are CTV and Global who are available in the entire country whereas TVA and TQS broadcast in French and are mainly aired in Quebec. However, TVA can be accessed throughout Canada by use of Cable television. Canada also has a national network, the Aboriginal Peoples Television Network (APTN) ...read more.

is spelt out in the 1991 broadcasting act as follows: "...the Canadian Broadcasting Corporation, as the national public broadcaster, should provide radio and television services incorporating a wide range of programming that informs, enlightens and entertains; ...the programming provided by the Corporation should: * be predominantly and distinctively Canadian, * reflect Canada and its regions to national and regional audiences, while serving the special needs of those regions, * actively contribute to the flow and exchange of cultural expression, * be in English and in French, reflecting the different needs and circumstances of each official language community, including the particular needs and circumstances of English and French linguistic minorities, * strive to be of equivalent quality in English and French, * contribute to shared national consciousness and identity, * be made available throughout Canada by the most appropriate and efficient means and as resources become available for the purpose, and * Reflect the multicultural and multiracial nature of Canada." 5. \ Private broadcasting networks in Canada: Even though the Aird commission had advocated for the establishment of a single public broadcasting system, the private stations still persisted and continued to service the local markets. ...read more.

On the other hand, the private broadcasting networks have focused mainly on American content to such an extent that it was feared that Canadians may lose their identity and become Americanized. For this reason, the broadcast act was set up so as to address the cultural and nationalistic goals of broadcasting. However, the private broadcasters still focuses more on foreign content as opposed to local content. This calls for an innovative solution that will allow for "Canadianization" of these stations 12. The requirements of the Canadian Radio- television and Telecommunications Commission are that all Canadian broadcasting programs should adhere to the rule of a 60% Canadian program content. They should ensure that this rule is strictly adhered to with serious repercussions for those who flout such regulations. However, care should be taken to ensure that important information from international sources is not locked out in the name of promoting Canadianization. Care should also be taken to ensure that the choice of the audience is not tampered with through over- regulation of program content. At the end of the day, the public and private corporations all serve the same function which is to entertain, inform and educate. Thus they should ideally serve under the same mandate but serving under different mandates promotes competition and widens consumer choice. ...read more.