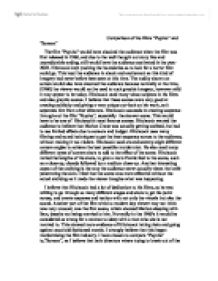 Comparison of the films "Psycho" and "Scream" The film "Psycho" would have shocked the audience when the film was first released in 1960, and due to the well thought out story line and unpredictable ending, still would have the audience captivated in the year 2002. Hitchcock kept pushing the boundaries as to how far a horror film could go. This kept the audience in shock and excitement as this kind of imagery had never before been seen at this time. The nudity shown on screen would also have shocked the audience because normally at the time, (1960) the viewer would not be used to such graphic imagery, however mild it may appear to be today. Hitchcock used many taboo subjects in his films and also graphic scenes. I believe that these scenes were very good at creating publicity and giving a very unique out-look on his work, as it seperates him from other directors. Hitchcock succeeds in creating suspense through-out the film "Psycho", especially the shower scene. ...read more.

Another part of the film which a modern day viewer may not think was very unusual, was the first scene, which showed Marion sleeping with Sam, despite not being married to him. Normally in the 1960's it would be considered as wrong for a woman to sleep with a man who she is not married to. This showed more evidence of Hitchcock taking risks and going against usual old fashioned morals. I strongly believe that this began mordernising the film industry. I have chosen to compare "Psycho" to,"Scream", as I believe that both directors where trying to break out of the predictable horror movie cycle, which had been rampant during thses times. "Scream" had a much larger budget than "Psycho", and was released many years later in 1996. Since it was released in October of 1996, it has made over $86 million dollars, and two sequels have been released. Wes Craven (The director of "Scream"), is also famous for other blosckbuster movies such as, "I know what you did last summer", "I still know what you did last summer" and "The mind ripper". ...read more.

These types of characters are mainly portraid as strong minded individuals, who only end up being killed if they take part in any of the previously mentioned activities. A lot of modern teen horror films contain phrases like, "who's there?" or " I'll be right back", coincidentally if a person says them, they will inevitably be murdered. Craven abandons these predictable out comes in "Scream" when the main character, Sydney Prescott, loses her virginity, drinks and actually lives to be in the two sequals. These new ideas and abandoning old ways whilst bringing in new convention, create more suspense and leave the film very unpredictable to the audience. Just as though Hitchcocks "Psycho" did. In conclusion I believe that without Hitchcock starting, what I would call a revolution in the film industry; by pushing the limits and using low cost effects to create a more realistic cinematic experience.The film industry would not be as decensortised as it is today. I also believe that Wes Craven plays a big part in modern day films as he is, like Hitchcock, inventing new and less predictable ideas, therefore challenging directors to come up with more inavative films. ...read more.