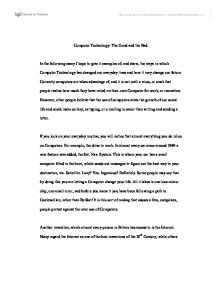 Computer Technology: the Good and the Bad.

Computer Technology: The Good and the Bad. In the following essay I hope to give it examples of, and show, the ways in which Computer Technology has changed our everyday lives and how it may change our future. Currently computers are taken advantage of, and it is not until a virus, or crash that people realise how much they have relied on their own Computer for work, or recreation. However, other people believe that the use of computers stints the growth of our social life and could make us lazy, as typing, or e-mailing is easier than writing and sending a letter. If you look on your everyday routine, you will notice that almost everything you do relies on Computers. For example, the drive to work. In almost every car since around 1996 a new feature was added, the Sat. Nav. System. This is where your car has a small computer fitted in the boot, which sends out messages to figure out the best way to your destination, via. ...read more.

Once that has been opened, there is no going back, as it will mercisley tear through every connected computer in a matter of minutes, and before you know it the Presidents own Top Secret files from the 50's have been destroyed. Of course, a lot of money has been spent on Preventing this, but on average two of these e-mails are received by EVERYBODY using a popular Internet service, i.e. Microsoft. But on the other side of the Virtual Coin is the 'fun' side of the Internet. Message Boards, Chat Rooms and Interactive Forums are some of the most popular things on the net. In fact, one Internet Messageboard, community.sigames.com, has over 10,000 registered members. But what is amazing about that Message Board is that it is a Board based on a Computer Game. Just one! So if 10, 000 people want to talk about one Computer Game, imagine the amount that are willing to talk about a football team, or a TV Show-and it is there where two dangers lie. ...read more.

At the minute Five countries, Britain, France, America,, China and Russia, all have the capability to wipe out any city in the world with the flick of a switch. This is due to the Technology each side has developed over the years, but while dangerous, some ask, Is it such a bad thing? Because of these capabilities each side has become scared in a way of they other. Everyone in the world knows that the next World War will be the most deadly of all, as no armies will fight one-on-one, but cities will be decimated with Nucluer Bombs, and Millions, probably billions will die. Because of that realization, every country is unwilling to go into War, so Military Technology has, in a way, delayed a World War. So with billions on-line, and billions driving cars technology has made a difference to all our lives, but also holds our lives in its hand, ready to crush us. In summary, I have decided that the current technology is far too advanced for the mere public to be allowed access to. Most of the computerized technology is beyond most people's wildest dream's, so why should a risk to your life (although relatively small) by exposed? ...read more.