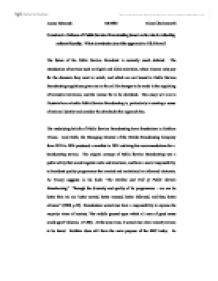 Construct a Defence of Public Service Broadcasting based on its role in reflecting national identity. What drawbacks does this approach to P.S.B have?

(2004) This model supports the social responsibility theory, the media has an obligation to society, and the government regulates them to ensure that they are acting responsibly. Therefore the state intervenes to a certain extent to ensure that society's expectations are being fulfilled, and "broadcasters operate in the public interest and are responsive to public opinion". (Seaton, 1991, p301). Having considered the role of the state in public service broadcasting, it is necessary to reflect on the distinction between Nation and the State. One way of defining nationalism is the groups that people divide themselves into, for example, a cultural or ethnic group. Each nation should have its own state, i.e. although England is part of the United Kingdom, it has its own set of values such as a flag and football team for example, that creates an English state. Therefore it is apparent that Nation and State are not the same. National Identity is about defining groups by similarities such as accents or languages. In his book "National Identity", A. Smith proposes that national identity is defined by ethnicity, "an ethnic group is a type of cultural collectivity, one that emphasises the role of myths of descent and historical memories, and is recognised by cultural differences like religion, customs, language or institutions." (1991 p20) He goes further to list six attributes of ethnic community; a collective name, a myth of common ancestry, shared historical memories, one or more differentiating elements of common culture, an association with a specific homeland and a sense of solidarity for significant sectors of the population. Therefore the Public Service Broadcast's role of reflecting National identity consists of trying to create a national identity for Britain - a sense of what Britain stands for. In "Understanding Television" Scannell summarises how broadcasters achieve this through the variety of programmes they produce. "The idea of a national culture was given new expression in broadcasting through those kinds of programmes that had the effect of making the nation as one man." ...read more.

Finally, through the introduction of services such as digital and satellite television, "it becomes clear that the sets of principles through which the idea of public service broadcasting was articulated have a precarious social, political, economic and cultural anchorage." (Tracey, 1998, p.33) Digital broadcasting opens up an enormous variety of channels to viewers, including international channels which are subject to minimum regulation. These developments make the Public Service Broadcasts notion of national television less credible, because audiences have now become fragmented, "satellite will accelerate the decline in audiences for existing networks: more viewing opportunities will mean fewer viewing hours". (Seaton 1991, p.240) Consequently, a decline in viewing figures restricts programme commissioning, as outlined by the White Paper in the 1990's; one hour of commissioned programming could cost up to �20,000. In comparison, an hour of American television could be bought for �2,000. Inevitably, the mass public and government have been calling for a review of the television license. Digital Broadcasting enables viewers to pay for just the channels they wish to watch, including the BBC and ITV. Therefore why should an additional payment be made in the form of the licensing fee, particularly if people choose not to watch the BBC? In conclusion, it seems inevitable that public service broadcasting will eventually cease to exist. The license fee will be abolished and replaced with some other form of funding such as through advertising revenue. This will lead to a rise in competition for viewing figures and funding. Good quality programmes will cease to be commissioned as cheaper programmes are imported by digital channels. Whilst people may believe that a wider range of channels means a freedom of choice for the viewer, without doubt, with a lack of regulation to maintain programmes of an informative and educative nature, "the new stations will naturally turn, like their American counterparts, to the common denominator of pop, chat, soap and sport." (Seaton, 1991, p241). The lack of British programmes, defining what Britain stands for will eventually indicate the demise of a national identity. ...read more.