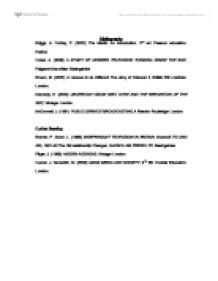 Bibliography Briggs, A. Cobley, P. (2002) The Media: An Introduction, 2nd ed. Pearson education: Harlow. Crisel, A. (2006) A STUDY OF MODERN TELEVISION THINKING INSIDE THE BOX, Palgrave Macmillan: Basingstoke. Brown, M. (2007) A Licence to be Different The story of Channel 4, British Film Institute: London. Kennedy, H. (2005) UNCERTAIN VISION BIRT, DYKE AND THE REINVNTION OF THE BBC, Vintage: London. McDonnell, J. (1991) PUBLIC SERVICE BROADCASTING A Reader, Routledge: London. Further Reading: Bonner, P. Aston, L. (1998) INDEPENDANT TELEVISION IN BRITAIN Volume5 ITV AND IBA, 1981-92 The Old relationship Changes, MACMILLAN PRESS LTD: Basingstoke. Pilger, J. (1999) HIDDEN AGENDAS, Vintage: London Curran, J. Gurevitch, M. (2005) MASS MEDIA AND SOCIETY, 4TH ED. Hodder Education: London. British Public Service Broadcasting British public service broadcasting has survived the test of time and is now over eighty years old. To understand its longevity we must consider its initial conception, the challenges it has faced and the changes it has undertaken over the years. The political and societal changes that Britain has undertaken are reflective of how the face of public service broadcasting has changed. That is, it can be argued, that the political leanings of a democracy are expressed by the majority and therefore mirror the mood of the public. And because public service broadcasting is overseen by ruling government, it also reflects the ideology of the majority, ensuring its continued success. ...read more.

The Committee decided the BBC, whose broadcasting policies, moral and social ideals were favourable, should be given the task of managing this new form of communication. The idea of raising more revenue through advertising was dismissed, the committee deeming expenses being met by the existing licence fee scheme. The government acknowledged the committee's findings and the BBC continued to be the nation's sole broadcasting company. The BBC television service was the first in the world and began transmissions on the second of November 1936 (Crisell 2006). The BBC remained largely unchanged until the Second World War; despite various committees being appointed by government to discuss its political capacity. The war fortified the BBCs character as a national institution. However, questions were also raised over its monopoly status, and some feared it was "...an unacceptable restriction of freedom in peacetime." (McDonnell 1991, p.19). It was felt by some, that the BBC's charter (which ran out in 1946) should not be renewed without a public enquiry. The newly elected Labour government dismissed these ideas and renewed the Charter in 1946, offering no chance of debate. This disgruntled former Director -General of the BBC, Sir Frederick Ogilvie, who sent a letter to The Times challenging the monopoly status. He claimed that the monopoly diluted the BBC's strength and that freedom of British citizens was under threat. ...read more.

The question of finance could not be agreed upon (or interest raised) and early attempts failed. But in 1990 Rupert Murdoch's BSkyB began to take off. Its early conception offered only limited programmes and showed mainly films and American imports and did little to weaken the position of the BBC (ibid 2007). Consumers, pay for these services on a contractual basis, and are only available to those who can afforded them. By the arrival of 1997's Labour Government, lead by Tony Blair, the cable and satellite market was steadily growing and widening the range of its programming. In the last ten years, a new technology has advanced, Information Technology and provided internet access to the majority of homes in Britain, where viewer can download television programmes to watch on their home personal computers (Briggs & Cobley 2002). Rather than be left behind, the BBC has reinvented itself over the years. It has continued to reflect the ideology of the majority, whilst, it be argued remaining its integrity. It has faced many challengers, but remains a public company, still funded by the licence fee and independent of direct state control. The BBC has recognised new advances in technology and now offers digital services, enabling it to offer minorities a voice and inclusion in society. Because of the way it is funded it continues to be available to anyone on the purchase of the licence fee and helps to unite society regardless of class, race, social position, political leanings, age or gender. ?? ?? ?? ?? 2 Donna Farrell U0760420 ...read more.