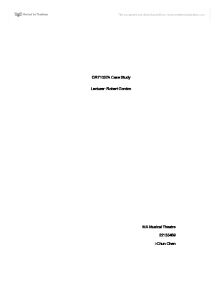 DR71037A Case Study Lecturer: Robert Gordon MA Musical Theatre 22133489 I-Chun Chen Essay Topic The case study of costume design in the Hollywood musical, Funny Face (1956). 'If clothes make man, then costumes certainly make actors and actresses. I have much for which to thank the talented men and women on whom I have always been able to rely'. (Audrey Hepburn) The images of Audrey Hepburn as Jo Stockton in the fashion show musical, Funny Face, are still remembered by many movie and musical fans. Her elegant style and the spectacular costumes made by Hubert de Givenchy started a fashion trend in the Hollywood glamour age; and even now, her particular fashion style of black tight-fitting sweater and pant with white socks and black loafers in the scene of 'Empathicalist's Dance' still inspired many fashion designers and stylish women. It is impossible to estimate how a film star through the use of costumes and accessories can provoke millions imitations and create a trend. However, there is no question that with the medium of cinema, fashion becomes more influential; and with the cooperative works of a couturier, Givenchy, a costume designer, Edith Head, and a star with her own image, Audrey Hepburn, the fashion show musical, Funny Face, is so impressive in fashion and artistically integrated. I conclude Funny Face as a fashion show musical, because the fashion shows that exhibit Hepburn's Paris couture and the particular fifties style of women's dresses are essential to the storyline. However, in several musical numbers, such as 'Empathicalist's Dance', fashion is used just to support the song and dance. Thus, in this essay, I will argue there is a difference between using song and dance as accessory to the film that mainly celebrates the exhibition of women's fashion, and using fashion as a backdrop for song and dance numbers. I will look at the visual style of the fashion show and musical numbers in Funny Face, and its relation to fashion style in the fifties, Hepburn's self image, French couturier and the role of costumes within the musical. ...read more.

Hepburn's costume before she turns into a model for Paul Duval is designed into a set of a dark grey woollen vest and a brown woollen skirt, which portraits her as a bookworm in the beginning of the movie. But there are still Hepburn's styles in it, such as the pipe-shape line of the costume, and a pair of loafers. Moreover, Hepburn's particular style - a scarf folded in the triangular form and tied under the chin appears in the musical number of 'On How To Be Lovely'. Probably Hepburn discussed the image of the costumes with Head before the costume construction, because she was very concerned about her public image, and because of the previous working experience with Head in Roman Holiday (1953), in which 'together Head and Hepburn took advantage of her lithe dancer's body. The star took to actually sketching costumes on "little Audrey" to show the designer what she wanted' (Patricia L. Fox, 1995, p112). For the female staffs of Quality magazine, Head also designs elegant fifties lady's suits in numerous vivid colours with narrow skirts, tight-waist jackets, delicate hats and pump high heel shoes, which look like the fashion in the fifties women's fashion magazine. But for Maggie, the editor of the magazine, Head uses more classic colours, such as black, white, grey, dark red and beige to suit her age and her superior occupational position in the magazine company. However, for the empathicalists, costumes are designed in the funky styles, and are created to wear untidily, such as men's suite jacket with jeans, black and white striped T-shirt with traditional gentlemen's vest, and suite with shirt with button unfastened, to indicate their philosophical images and free-and-easy lifestyle. Besides, Head wisely picks bright costumes for the empathical dancers in the musical number of 'Empathicalist's Dance' to make a contrast with Hepburn who wears all black, and to make dancers stand out from the dark background. ...read more.

In 'He Loves And She Loves', Stockton says 'I never want to go home, I love Paris! I love these clothes and the little church! And I love you!', which shows her thanks to women's fashion and Paris that allow her to be beautiful through the French couture and fall in love with a dandy fashion photographer. The relationship between well-designed costumes and women's attractiveness (their marriage) is indivisible. If it is true that most men are attracted by pretty women, then a woman can assume her attractiveness through the well-made costumes. Hepburn herself is an example of a pretty woman who is made beautiful by well-made costumes: when Head assigned to Roman Holiday (1953), 'she [Head] thought Audrey's neck too long, her shoulders too wide, brows too bold, teeth too crook and feet too big' (Patricia L. Fox, 1995, p112). Comparing her with other popular Hollywood female stars in the fifties, such as Marilyn Monroe, Hepburn did not satisfy the standard of beauty in that age which required a voluptuous body feature. Her elegant Hepburn style is recognised due to Givenchy's magical couture. For audience, Funny Face can be seen as her real story of becoming a sophisticate, stylish and popular woman. It is needless to say that Givenchy's costumes contribute to a successful creation of a beautiful woman in the film. In conclusion, as a fashion show musical film, Funny Face certainly takes costumes as a significant part of the movie, and adds an entertaining value by providing singing and dance musical numbers that are well integrated by the use of the costumes. Moreover, because a costume designer of a musical movie has to work on a fixed budget, it is impossible to regard her creations as independent works of art. Her designed projects are supposed to be integrated into the overall context of the film. On the other hand, the European couturier is allowed to express his idea freely, and guarantees the publicity of a star and the box office receipts by promoting his particular designs. Needless to say, a star is a movie's best advertisement. ...read more.