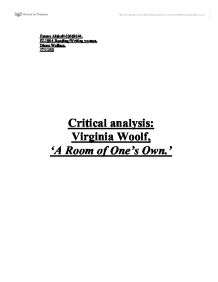 Critical analysis: Virginia Woolf, 'A Room of One's Own.'

Emma Alaball-03069044. EL1S04-Reading/Writing women. Diana Wallace. 17/11/03 Critical analysis: Virginia Woolf, 'A Room of One's Own.' Emma Alaball-03069044. EL1S04-Reading/Writing women. Diana Wallace. 17/11/03 Virginia Woolf is one of the most highly acclaimed female authors and feminists of the nineteenth and twentieth century. Her essay and lecture, 'A room of one's Own,' clearly demonstrates her attitude and opinions towards a patriarchal society during her lifetime. Woolf portrays her judgments through the use of language, style, narrative, and outspoken viewpoints about men, male-dominance, and female subservience. The end of chapter six is a clarification and summary of Woolf's beliefs, which are expressed throughout the essay. This essay will provide a critical analysis of this part. Woolf's use of style, language, and narrative is evident throughout the extract. She particularly uses irony and sarcasm combined with humour in order to contradict the general opinions of men, as well as to emphasise and clarify her argument. ...read more.

In 'A Room of One's Own', there is no one name or characteristic for the narrator of the extract, hence the use of the first person narrative of 'I.' Here, 'I' is used as a textual necessity, as it is a suitable term to describe somebody who has no real meaning or identity within the world. Woolf uses this subtle method to portray how women are excluded from society in terms of education, literature, and rights. Moreover, Woolf's use of the first person narrative allows the extract to become more personalised towards the reader, in that they can place themselves within the extract and relate to the points raised within it. Woolf automatically gives the reader a sense of ambition by allowing this form of involvement in her work. "I hope you will possess yourselves of money enough to travel and to idle...confining you to fiction." She moreover inspires the readers and listeners to have an aspiration in life, despite the restrictions of being a woman. ...read more.

"I like their (women's) unconventionality...their anonymity." Therefore, for a woman to be self-confident is an act of rebellion within a patriarchal society. 'The implication is that women can only operate within the constraints of patriarchy as surfaces with no depth, mirroring that 'confidence in oneself' which men have created precisely by denying the alterity of women.7' Woolf, in some ways seeks revenge on the patriarchal society through the characters of 'Professor X,' and 'Mr John Langdon Davies.' She gives 'Professor X' neither a name nor identity, and, through this illustrates how women are excluded from society. 'Mr John Langdon Davies' opinion reflects the extreme chauvinism in Woolf's era. Overall, Virginia Woolf's, 'A Room of One's Own,' is an essay with shifting but frank viewpoints. It encourages the reader to see that women's futures and lives are varying, unstable, and dependent on the patriarchal society. However, although 'A Room of One's Own,' is an outwardly feminist text, it does not argue for a matriarchal society, but a just and liberal culture that allows both women and men to have the freedom of choice and absolute equality. ...read more.