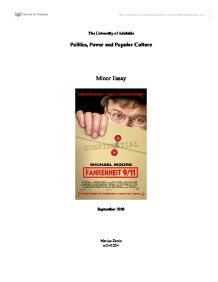 Critically analyse the politics (the ideology) of Fahrenheit 9/11

The University of Adelaide 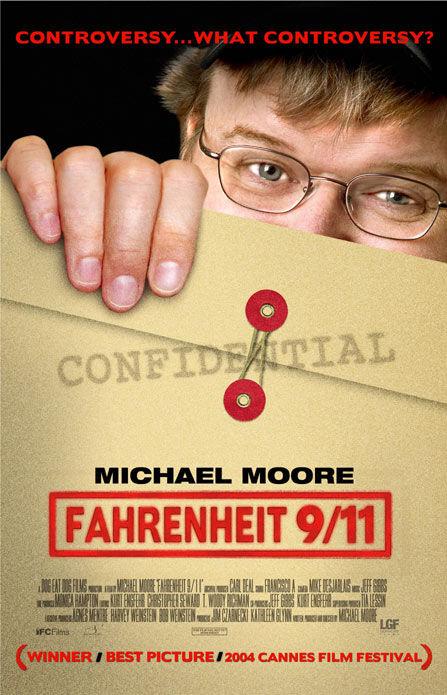 Critically analyse the politics (the ideology) of Fahrenheit 9/11

Fahrenheit 9/11 was produced, written and directed purely to criticise the actions taken by the United States President George W. Bush following the destructive day that was September 11, 2001. The events of 9/11 shocked the entire world and changed the face of terrorism forever. But it was the actions taken by the American democratic government that caught the attention of media outlets around the world.   Director Michael Moore using interviews, official documents and news reports highlights ‘fascinating and inflammatory ideas about George W Bush, his family, and the way he handled the events leading up to and after 9/11’ (Levine 2004). There is no doubt that the film criticises George W. Bush and the American political rulers.

Not all people will agree with the claims made by Michael Moore. It will often depend on your political preference.  People against George W. Bush will love it and claim it to be the closest document to the bible, while supporters of the newly Ex-President will reject all the claims. Moore chooses to look at aspects of Bush’s time in the White House all from a negative point of view and ignores any and all parts of the good aspects of his presidency. Of course he uses facts to support his claims which make it difficult to rebut and easy to be persuaded.

While Michael Moore claims that the film is not about politics, however, he provides the audience with enough information and persuading cinematic techniques allowing them to draw their own conclusions.  Moore begins with the footage at the start that surrounded the election of President Bush, the “stolen 2000 election” (Tremoglie 2004), making it seem like a conspiracy theory that allowed George W. Bush to become president. It also shows images of the inauguration where the President’s car is ambushed by protestors holding banners ‘you’re not my president.’ Another example is ‘Moore’s focus on Saudi Arabians who have substantial financial investments in the United States, including corporate linkages with the Bush family’ (Political Film Society 2004). In his first nine months in office, Bush spent 42% of that on vacation. On September 5, Bush is shown on holiday, only months after being elected and only a few days before the attacks. These images all edited together one after the other are all done to bombard the audience with disturbing factual evidence. The film reports on information such as how the family of Osama Bin Laden was flown out of the United States shortly after 9/11 without interrogation from the FBI while the rest of the country were banned from flying and airports were shut down. It’s clear that this information’s sole purpose is to perceive the President in a negative light. To make viewers believe that Bush was helping the family of Osama Bin Laden, the apparent mastermind behind the attacks.  Footage is shown of Bush ignoring warnings about a possible attack on American soil and also as he is told of the attacks. The footage is set up to show Bush as a ‘fool, perhaps a puppet of those in Washington who are really in charge’ (Political Film Society 2004). Most shockingly is the footage of President Bush first being told of the attacks on the World Trade Centres. He is in a classroom with students and allows much time to pass while he digests the news. While his intentions not to scare the children might have been good, the film makes Bush look like a President who had no idea how to handle the situation about the unfold.

Once the attacks happened Moore chooses to focus on the actions of Bush in response to the terrorism. In touching on the subject of Iraq, Moore portrays Iraq only in a bad light once American infiltrates the country, which suggests that Iraqi people suffered only after the war began and that under Saddam Hussein’s dictatorship the people of Iraq were treated better. Moore uses juxtaposition through images of happy Iraqis with the voice over of George W. Bush’s speech just before the beginning of the War on Terror.  Moore uses this technique to suggest to the audience that Iraqis were all happy and leading normal lives prior to the actions of George W. Bush and while there is truth to the images to some extent, there was much suffering prior and many were relieved to bring about the end of the dictators reign.

Many people were under the impression that the actions taken by Bush were a decisive action against the terrorists in charge of 9/11; however Moore implies that Bush had alterier motives for starting the war. The aim of the War was to disarm Saddam Hussein who was harnessing Weapons of Mass Destruction. Constant Press conferences and news interviews were full of claims ‘that the Iraqi leader would supply terrorists with chemical, biological and even nuclear weapons to use against the American people’ (World Socialist 2003). He claimed that the terrorists responsible for 9/11 were Al-Qaeda who were protected by the Taliban in Afghanistan and supplied weapons by Iraq. On this basis Bush cited that this threat was reason enough to reject international law and unleash the US troops and coalition onto Iraq, a country troubled enough with poverty and economic hardship. Despite all attempts and claims that it was only a matter of time until these weapons would be found, but never were. Moore highlights and suggests through news conferences and interviews that the ‘war was a lie’ (World Socialist 2003). Of course not everyone agreed or bought the claims made by the American government. ‘No government in Europe or the Middle East regarded Iraq as a military threat’ (World Socialist 2003). And when the UN sent inspectors in to locate these weapons, none were found. Anti-war support began to grow from the people that were the supposed targets of Iraqi weapons. Protestors marched in streets denouncing the decision. Some of the demonstrations were the biggest since the Vietnam War.

Moore’s documentary becomes ever more shocking when he focuses on the soldiers that are fighting in the War on Terror and how they recruited the soldiers. Not only does this make George W. Bush seem less competent as a leader, but also makes the military commands seem corrupt and devious. And suggest that all the negatives actions occurring are all related to Bush’s incompetence as a leader. In touching on these issues, ‘Moore leaves the conclusions to the film viewer,’ however his position is clear (Political Film Society 2004).

Moore turns our attention to the recruitment techniques of the military. The unemployed people of Flint, Michigan were targeted. These hapless poor ‘Americans were roped in by recruiters hanging out at shopping malls’ (Levin 2004) and looking to sign up unsuspecting citizens. And yet we also see images and interviews with soldiers fighting in Iraq who see the invasion as a huge high as they pump themselves up with video games and rock music. However, in the end they are fighting for their country and leaders and simply want to know if there is a reason to fight at all? Initially many sign up for the incentives of money, travel and education, ‘then they see the thrill of carnage and then they want to fight for the food of the world.’ (Weber 2006) Joined by the saddening scene of a mother and father speaking out about the devastation of losing their son and they ask, ‘for what?’ Moore is asking audiences to also ask the same question. Contrasted with Moore’s efforts to convince congress leaders to volunteer their sons and daughters in the War on Terror, all avoid the question or refuse to answer. After all only 1 out of 500 of the congressmen’s son is participating in the war. This makes the government look like they are willing to sacrifice the lives of soldiers for their own needs, but will not sacrifice their children for the so called ‘good of the country.’

Moore has been accused by some as ‘hoping to bring down the US government’ (Higgins 2004). However, in the election following the release of the film, Bush won a second term in the office, suggesting supporters rallied to his defence. But despite all this, one thing Michael Moore should be grateful to George W Bush for is the freedom of speech that democracy allows. In some countries, people as outspoken as Michael More have and will continue to be persecuted, punished and imprisoned for speaking out against their governments. His film is shocking and eye-opening and suggests that the start of the Bush administration was the end of democracy; however, while people such as Michael Moore are able to make films like Fahrenheit 9/11 democracy still exists in the United States. And while they may cover up the truth and tell the citizens lies, according to Michael Moore, there will always be an ‘Independent Media who will tell us the truth’ (Michael More 2004).