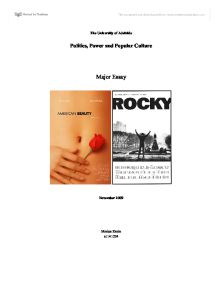 Critically analyse the Representation of the American Dream in American Beauty and Rocky.

The University of Adelaide Politics, Power and Popular Culture Major Essay November 2009 Marius Zanin a1141224 'We hold these truths to be self-evident, that all men are created equal, that they are endowed by their Creator with certain unalienable Rights that among these are Life, Liberty and the Pursuit of Happiness' (The Declaration of Independence, 1776). Critically analyse the Representation of the American Dream in American Beauty and Rocky. The American Dream is 'that dream of a land in which life should be better and richer and fuller for everyone, with opportunity for each according to ability or achievement' (Adams 1931). 'It is a desire of people to be recognised by others for what they are, regardless of the fortuitous circumstances of birth or position. It is to dream of opportunity and success, with the promise that regardless of ascription or background (race, class, gender) hard work and fair play will almost certainly lead to success' (Cao 2009). It definitely sounds appealing and therefore it's no surprise that the storyline of the American Dream plays a role in many popular Hollywood films. Some films, such as Rocky (1976) support the idea of the American Dream while others such as American Beauty (1999) criticise it. The American Dream began back in 1776, when the idea of freedom being a right and that tyranny could be successfully opposed was the belief amongst the people. There was also thought that the government could support all the people, not just a few, and while this was revolutionary in 1776, it still also is today. Some critics have suggested in recent times that the American Dream is something of the past; that 'dreams rarely come to pass and those that do rarely last. The American Dream is no exception' (Schoon 2008). 'The idea of the American Dream has been attached to everything from religious freedom to a home n the suburbs, and it has inspired emotions ranging from deep satisfaction to disillusioned fury' (Hochschild 1995, 15). ...read more.

Carolyn is in control of the household, something which traditionally has been the role of the male. Lester feels trapped by his wife as she has all power over him. This is evident in scenes at the dinner table, where the music is chosen by Carolyn and neither Lester nor their daughter has choice over it. This form of power is different to the traditional view of men controlling the household and that men are the bread winners. Lester also breaks this challenge when he quits his job, leaving Carolyn to earn for the family. These acts go against all that the American Dream claims to be. Carolyn upholds her identity well in public, however, when alone she often breaks down and cries, firstly in the house that she can not sell and secondly in the car where she tells herself that she will not be a victim. Carolyn is a representation of women who 'will not be dominated by men and out in to the hegemonic view of women being weaker and the victims of our society.' Normally it is the male who refuses to cry in front of others, but in American Beauty it is Carolyn who does not want to show her emotions. She also challenges the stereotypical gender role when she uses a gun to release her anger. A gun, normally a masculine object and phallic symbol challenges the stereotypical view of the woman being a nurturing person. This aspect of the film allows Carolyn to be more masculine. 'The movie looks to dissect American culture and functioning on all levels, from daily interactions to the compounding societal pressures to become self-actualised and successful.' The film takes typically stereotypical characters and peels away the layers to reveal their human suffering and distress. It suggests that despite the hardships that we endure in our daily lives, there is still beauty present in all that we do. ...read more.

This is a fairly insightful analytic critique of the way that "the American Dream" is represented in two very different films. It is written in clear, lucid and simple language - a lack of pretension that is very much to its credit.

Although there is much that is very well observed, there are inaccuracies and inconsistencies in the argument as a whole, all of which derive from the fact that the focus of the essayist's research was into critiques of the films rather than critiques of the mythology of the American Dream. Actually, these perspectives are very much a part of the critiques of some of the writers that have been cited, but the essayist has either not understood this or chosen to ignore it. This is a pity, for it seems unthinkable that an essay about a cultural mythology should be undertaken without some reference to the feminist, post-colonial and Marxist critiques of the American Dream, even if it is only to refute the perspectives brought to the question by those disciplines.