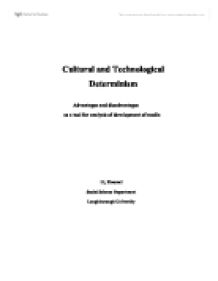 Cultural and Technological Determinism Advantages and disadvantages as a tool for analysis of development of media.

Section 2 Analysis of Brian Winston's cultural determinism 2.1 Advantages of cultural determinism In my point of view, Brian Winston manages to present us a solid history of "how are media born and developed" from a different angle. He shows us a broader view that not only technology but also economic, political, and social factors could influence the media development. His theory implicates that we could control the media and makes it work in a positive way. By comparison, McLuhan thinks that the modes of communication change and determine the society; he reduces human relations to media and ignores the people who control and use media. He also states no matter how technology is used, it has of itself a number of positive and negative consequences. From above, we could find that McLuhan's theory does a good job of analyzing what happened in the past and what is happening now, but not what might be the future communication because by his account, technology runs automatically. Human are impotence in front of it. Contrarily, Brian Winston's theory helps but not hinders us in coming to an understanding of the world. ...read more.

Nick Stevenson offers this historical summation of McLuhan as follow: In cultural and media studies, his ideas were at first warmly welcomed as making a major breaking through in articulating some of the dimensions of the emergent of electric culture. But the bubble of enthusiasm was soon to burst, and McLuhan's propositions were widely dismissed as exhibiting a form of technological determinism. Nowadays, with the development of electronic and digital communication, more and more scholars begin to rethink the rationality of McLuhan's theory. Just as Wasser,Frederick comments: In 1998, we need no longer consider whether his fame was deserved or not, the exposition in digital communications has confirmed his prophetic statement about global villages and media environments. Conclusion The debate continues over this topic between "technological determinism" and "cultural determinism" will continue to gain more attention as we are pushed into a world of telecommunication and advanced technology. It can be said true that "technological determinism" is a dominant force that shapes and changes society. Even if in Brian Winston's theory, technology is also seen as a very important factor. It can either be seen as a threat to our own free will, or it can be seen as a guiding tool that leads us to more effective ways of communicating. Either way, it is a force that cannot be overlooked. ...read more.