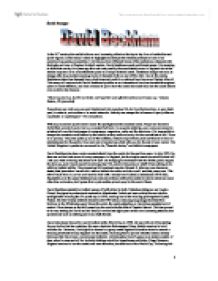 In the 21st century the media holds an ever increasing effect on the day to day lives of celebrities and sports figures. In this essay I intend to highlight and analyse the Medias portrayal of one of our countries top sports personalities. I will discuss how different forms of the media have obsessed with the highs and lows of England football captain, David Beckhams much publicised career. It is amazing to think that merely five years ago this man was possibly the most hated person in England due to the Medias exposure of an event that took place in a simple football match. Beckhams image was soon to change after he presented amazing levels of character both on and off the field. Due to the media, Beckhams status has changed from a bad tempered youth to a national hero known as Captain Marvel! This essay will explore how David Beckhams position as an international icon has elevated throughout years of media attention, and find evidence to prove how the media has made him into the much adored role model he has become. "News may be true, but it is not truth, and reporters and officials seldom see it same way" (James Reston, US journalist) Everywhere you look you see sport intertwined into everyday life, be it on the television, in your back yard, in schools, universities or in social networks. Nobody can escape the influence of sport, either as a spectator or a participant - it's everywhere. With any successful sports career comes the spotlight and the constant media. People are forced to forfeit their private lives to live in a constant fish bowl. As a sports celebrity, your every movement is splashed all over the front pages of newspapers, magazines, radio and the television. It is impossible to escape the constant scrutinization by the media, as they wait anxiously for the next athlete to fall. ...read more.

The media have turned Beckham into a patriotic symbol, the nation as a whole need to have a role model like Beckham to keep their spirits up. I do believe that Beckham enjoys all the media attention he receives and his wife especially. Hello magazine have almost elevated them both into a status of Prince and Princess. In conclusion it is blatant that David Beckham receives more media attention than any other footballer in the world, over recent years it has become apparent that he is able to deal with these pressures very maturely and professionally. However, it is imperative that this outstanding talent continues to do this and not go down the same road as talented predecessors such as Paul Gascoigne and George Best, who Beckham has been compared to in the past. This intense media obsession with Beckham has made him into the superstar he is today, and I believe it is fair to say he is a product of the media. Bibliography * Allan (1999); Making News: Truth, Ideology and Newswork. News culture, Open university press. * Fiske (1987); News reading, news readers * Dahlgren P, Sparks C (1992; Journalism and popular culture London: Sage publications Internet * www.manutdzone.com * www.newsbbc.co.uk * www.thesun.co.uk * http://homepage.tinet.ie/~redweb3/home/9899/reports/articles/articles.html * http://uk.fc.yahoo.com/b/beckhams.html Article 1 UK Press attacks Beckham 'petulance' The crowd saw one of the most exciting games in the World Cup David Beckham has been roundly pilloried in the British press being blamed by many for England's World Cup defeat by Argentina. Beckham: sent off for "stupid petulance" "Beck-home" said The Sun, "10 heroic lions, one stupid boy" proclaimed The Mirror. Many of the papers developed their coverage as the implications of England's defeat sank in. Half-an-hour of extra time plus a few minutes of tense penalties had left them with little time to assess the team's failure in their first editions. At first most reacted instinctively, echoing the feelings of disappointment and injustice felt throughout England, but later editions turned on the Manchester United midfielder. ...read more.

But the twisted ends of the series of small parallel plaits pulled tightly to his head still showed beneath the England team's three lions badge. The golden braids - known as cornrows - will be seen in their full glory later on Monday, when Beckham models the England squad's off-the-field Giorgio Armani outfits for the first time. Hairdressers across the country are expecting an influx of young men demanding cornrows. Beckham is the celebrity most men want to look like according to a survey of 300 by the makers of weight-loss drink Slim Fast. His skinhead and Mohican styles both prompted a spree of copy-cat cuts from fans. But the Alice hairband the 28-year-old had been using to control Beckham's formerly flowing locks proved considerably less popular. Beckham tried to hide his hair Any imitators may have to suffer for their new style. Hairdresser Kim Johnson, whose salon specialises in Afro-Caribbean styling, said cornrows "can be a bit painful". "It has to be quite tight for it to hold," he told BBC News Online. Manchester hairdresser Catherine Morris said her customers ask for Beckham haircuts soon after he unveils a new look. "When he had the Mohican all five year-olds wanted one," he said. Although cornrows might not be quite as popular. "Not all blokes have the length," he said. The skin-head was easy to copy Willie Hendry, who has styled the hair of Beckham's wife, Victoria, said the styles could take a few months to appear as hair would have to be grown long enough to plait. By then the Manchester United midfielder may have grown tired of the weekly re-plaiting needed to maintain cornrows. "It will probably be a passing fad because it's a bit of a pain," Mr Hendry said. He added: "On a 15-stone (95-kilogramme) man with a fat face it wouldn't work." The Beckhams are seen variously as trend-setters or label-slaves but their efforts never fail to arouse interest among fashion addicts. Tabloid photographs of Beckham wearing a sarong sparked a nationwide debate on whether men should wear skirts. ?? ?? ?? ?? Sarah Brunger 1 ...read more.