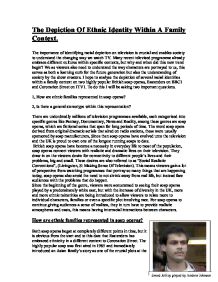 The Depiction Of Ethnic Identity Within A Family Context. The importance of identifying racial depiction on television is crucial and enables society to understand the changing way we watch TV. Many recent televised programme already embrace different cultures within specific contexts, but why and when did this new trend begin? We as viewers also need to understand the way characters are portrayed to us, this serves as both a learning curb for the future generation but also the understanding of society by the show creators. I hope to analyse the depiction of several racial identities within a family context on two highly popular British soap operas, Eastenders on BBC1 and Coronation Street on ITV1. To do this I will be asking two important questions. 1, How are ethnic families represented in soap operas? 2, Is there a general stereotype within this representation? There are undoubtedly millions of television programmes available, each categorised into specific genres like Fantasy, Documentary, News and Reality, among these genres are soap operas, which are fictional series that span for long periods of time. The word soap opera derived from original dramatic serials that aired on radio stations, these were usually sponsored by soap manufacturers, Since then soap ...read more.

What interests me and prompts my initial question as to "How the ethnic families are represented", is the fact that both soaps avoid direct contact into subjects within the family context which could be easily misinterpreted. Political views and Religion is avoided as much as possible, this could be due to the fact that a storyline into both views even with lengthy research would be treading into grounds that will open doors for many other criticism to representation. It is for this reason that the ethnic families within Eastenders are given the same storylines as those of the white community. It is a huge shame that Coronation Street has not taken the same approach, but instead only have 3% of its characters being minorities and that figure has decreased in recent times. Currently there are only two diverse characters in the soap, Amber Kaliri played by Nikki Patel and Kelly Crabtree played by Tupele Dorgu. Both characters unfortunately are not given centralised plots meaning they do not receive as much airtime as other actors, the plots they are given are very stereotyped, which leads to the next question. ...read more.

I find Coronation Street lacking in the understanding of modern society and also of the setting in which the show is based on. There is very little attempt to incorporate ethnicity within the plots and when there is a reference, it is a general stereotype based on what the director deems to be real life. It is a shame that a highly popular soap opera like Coronation has been running for so long and still has not abandoned the way television was viewed years ago, but instead retains its predominate white cast and settles for a strict type of audience with little allocation for anyone else. Several small changes could see more ethnic audiences taking notice of the show, but until these changes are made, the show's creators will find that, myself included more and more minorities will be watching it's biggest competitor, Eastenders. Sources . Sunday Mirror 2002 (http://findarticles.com/p/articles/mi_qn4161/is_20020421 /ai_n12842465) . (Making Sense Of Television) by Livingston S . Eastenders fact and history (www.bbc.co.uk/Eastenders/) . Coronation Street fact and history (www.itv.com/coronation street/) . (British Television - A Reader) by Edward Buscombe ...read more.