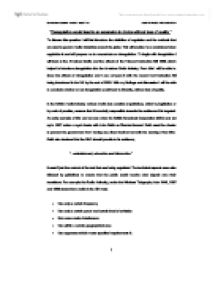 &quot;Deregulation would lead to an expansion in choice without loss of quality&quot;.

"Deregulation would lead to an expansion in choice without loss of quality". To discuss this question I will first introduce the definition of regulation and the methods that are used to govern media industries around the globe. This will enable me to understand what regulation is and will prepare me to concentrate on deregulation. To begin with deregulation I will look at the American Media and the effects of the Telecommunication Bill 1996, which helped to introduce deregulation into the American Radio industry. From this I will be able to show the effects of deregulation and I can compare it with the recent Communication Bill being introduced in the UK by the end of 2003. With my findings and discussion I will be able to conclude whether or not deregulation would lead to diversity, without loss of quality. In the British media industry various media text consists of guidelines, which by legislation or by code of practise, ensures that it is socially responsible towards the audiences it is targeted. An early example of this can be seen when the British Broadcast Corporation (BBC) was set up in 1927 under a royal charter with John Reith as Director-General. Reith used the charter to prevent the government from having any direct involvement with the running of the BBC. Reith also declared that the BBC should provide to its audience; "...entertainment, education and information." It wasn't just the content of the text that was being regulated. The technical aspects were also followed by guidelines to ensure that the public would receive clear signals onto their transistors. For example the Radio Authority, under the Wireless Telegraphy Acts 1949, 1967 and 1998 states that a radio in the UK must; * Use only a certain frequency * Use only a ...read more.

stated: "The media is one of the main sites for the productions and circulation of ideas" With more media companies, were more diversity, choice, ideas and biases for audiences to choose from. However the telecommunications bill resulted in the American radio industry to become more concentrated. This concentration has lead to media conglomerates buying up small companies and thus restricting points of view to the sole view of the media barons. This example on the media industry trend from differentiation to concentration can also be seen in the recent introduction of the Broadcasting Act 1990 & 1996 in the UK. The 1990 act attempted to open up radio by introducing three new independent nationwide radio stations and encourage the expansion of a new tier of community radio. Radio Licenses for Nationwide broadcast eventually went to Classic FM, Virgin 1215 and Talk Radio. However concentration of radio is also very evident. An example can be seen in Classic FM, who is owned by GWR group. The GWR also owns over 30 local radio licenses in major cities over the UK. From a Marxist perspective concentration of the media can be very dangerous. There have been many examples when media barons have influenced governments with their media companies. An example is seen when Australian Prime Minister Paul Keating welcomed News International Media baron Rupert Murdoch into making sure his newspapers would give his political party a good image. Murdoch's popular newspapers gave the pervious political party a bad image, which lead to their demise and loss of the elections. Lord Beaverbrook who owned the popular British newspapers Daily Mail, Daily Express, Sunday Express and Evening Standard stated the following: "I run the paper purely for the purpose of propaganda, and with no other motive." ...read more.

To produce such audiences the text would have a more dominate ingredient of becoming more entertainment based. An example of this can be seen in the recent flux of reality TV shows or the high levels of phone-ins shows on commercial radio. These are produced cheaply and attract audiences, which in turn attract advertisers. Curren (1996:140) concludes this debate with the following: "The mass media are rather like the political parties in that they tend to gravitate towards the centre in response to competitive pressures." As suggest by many of the debates made in this essay deregulation has lead to an expansion in choice. This has already been shown as an example with the introduction of the Broadcasting Act of 1990 and 1996 in the UK. As a result of deregulation much more choice and diversity of channels and media texts has been made available to the audience with the help of technological advances and legislation. However despite choice and diversity, the question on the quality of media programmes has casts some doubts over deregulation and its aim to provide quality text. As a result of further deregulation in the Communication Act 2003 concentration of the media industry has begun to take an effect, largely due to horizontal integration. This has lead to only a handful of media baron's over the world that could have the influence and power of the media to broadcast their ideology. It has also lead to the increase of competition amongst channels for advertisers. This has meant a compromise of programme schedules to create popular entertainment shows over the Reith's statement of "Information, Education and Entertainment". With more popular shows lie more audiences and the ability to attract more advertisers. It seems that quantity has become a realisation then quality. ...read more.