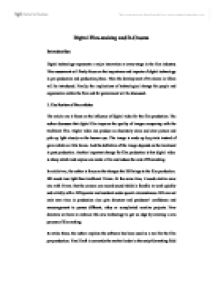 Digital Film-making and D-Cinema Introduction Digital technology represents a major innovation at every stage in the firm industry. This assessment will firstly focus on the importance and impacts of digital technology in pre-production and production phase. Then the development of D-cinema in China will be introduced. Finally, the implications of technological change for people and organisation within the firm and for government will be discussed. 1. The Review of five articles The article one is focus on the influence of digital video for the film production. The author discusses that digital film improve the quality of images comparing with the traditional film. Digital video can produce an absolutely clean and clear picture and pick up light closely as the human eye. The image is made up by pixels instead of grain which are little boxes. And the definition of the image depends on the treatment in post production. Another important change for film production is that digital video is cheap which lead anyone can make a film and reduce the cost of filmmaking. In article two, the author is focus on the changes the HD brings to the film production. HD needs less light than traditional 35mm. At the same time, it needs similar crew size with 35mm. But the camera can record sound which is feasible to work quickly and reliably with a DP/operator and assistant under special circumstances. HD can not only save time in production also give directors and producers' confidence and encouragement to pursue different, risky or complicated creative projects. New directors are keen to embrace this new technology to get an edge by creating a new process of film making. ...read more.